The demise of the Holden Commodore and Ford Falcon brought to an end the era of the Australian Muscle Car. So the blue oval turned to its All-American hero to give V8 fans an option - and the latest version is a track star.

The sixth-generation of the Ford Mustang is in its final year of life, but they saved the best ‘till last. Despite the introduction of the Mustang as a ‘global vehicle’ with this iteration Australia never got the fastest, most exciting models - the Shelby Mustang - but instead we got the Mustang Mach 1.

The Mach 1 is a throwback to the golden days of the ‘Stang in the late 1960s and early ‘70s. Introduced in 1968 the first Mach 1 was a performance upgrade for the ‘69 model, adding extras like a upgraded suspension, a unique wheel and tyre package and matte black bonnet with racing-style pins. It proved so popular it stuck around as an option until 1978 and then returned as a limited time option on the fourth-generation Mustang in 2003.

In 2021 Ford once again revived the Mach 1 name, sticking to the original concept it adds a range of performance parts (many borrowed from Shelby) to elevate it above the V8-powered GT.

While there’s some incremental improvements to the V8 under the bonnet, the primary focus on the upgrades is the handling package. 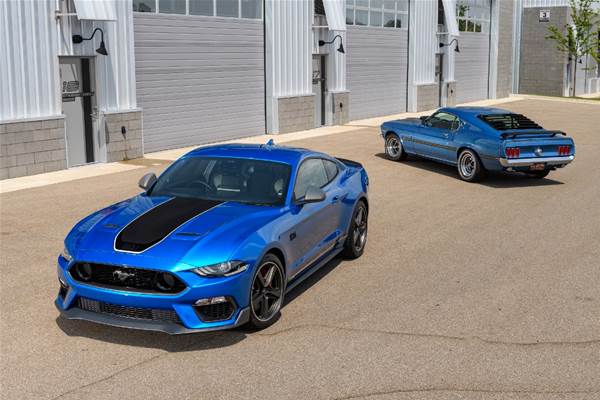 The latest Ford Mustang Mach 1 with the original.

The suspension has been overhauled, with Shelby GT350 toe-link components and the GT500 rear subframe, which features stiffer bushings, adding to enhance the dynamic capability. The MagneRide adaptive dampers have been re-tuned and there are stiffer anti-roll bars front and rear plus new front springs. The steering has also been improved with a new tune for the electrically-assisted system that the company claims makes it more responsive.

The Mach 1 also gets a unique look, with a new 3D mesh design for the grille, a pair of round recesses that are meant to evoke memories of the ‘70 Mach 1 which had extra fog lights and a low-gloss black ‘pony’ badge.

Those are just the cosmetic changes, Ford Performance engineers also made some meaningful performance upgrades, with Ford claiming the Mach 1 has 22 per cent more downforce than the Mustang GT. The lower bumper has been redesigned to simultaneously create more downforce and improve cooling. The undertray is 50cm longer than what you’ll find on the GT and it also channels more air to the six-piston Brembo front brakes. At the rear there’s a unique bootlid spoiler and the rear diffuser from the GT500.

Additional cooling, like the new undertray design that helps the front brakes, was another big part of the engineer’s efforts. So they added heat exchangers to help the engine and transmission oil temperatures, plus there’s an extra cooler for the rear axle and differential.

Another change that helps both the styling and the performance is the new wheel and tyre combination. The 19-inch alloys are designed to look like the ‘Magnum 500’ wheels from the ‘70s but they're also wider - measuring 9.5-inches wide at the front and 10-inches at the rear.

They’re also wrapped in Michelin Pilot Sport 4 tyres, which is some of the better track-capable road car rubber you can buy today. 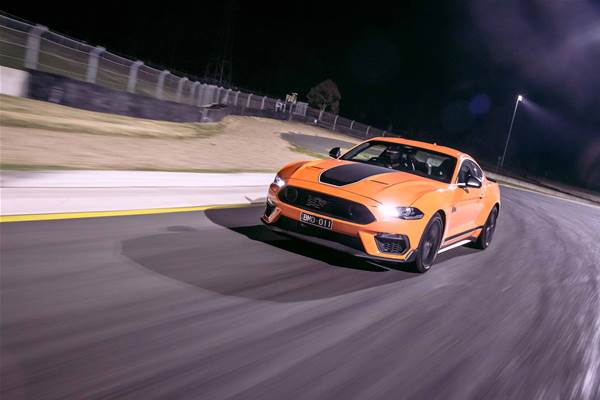 The Mustang Mach 1 is designed to shine on the track.

AMC was fortunate enough to drive the Mach 1 on both the road and the track, running a series of laps of the ‘Amaroo’ layout at Sydney Motorsport Park, so we’ve got to experience both sides of its personality.

The first thing that hits you when you see the Mach 1 is the visual changes do really make an impact. Even without the ‘Mach 1’ badge on the fenders you’d notice this is something different from the regular GT.

Then there’s the noise when you fire it up. The changes to the 5.0-litre V8 weren’t enormous but they are arguably greater than the sum of their parts.

There’s a new open-air induction system, intake manifold and throttle bodies from the Shelby GT350 to help it breathe better. There’s also a new tune for the active exhaust and a 4.5-inch exhaust tip to help it sound better.

Ford’s engineers also re-tuned the engine’s software to create what they call a “reward-to-rev character” to the engine. What that means is, the new peak power output of 345kW (up from the 339kW in the GT) doesn’t kick in until 7500rpm. Peak torque remains unchanged compared to the GT, making 556Nm.

All these changes means while the Mach 1 isn’t much more powerful than the GT, it makes a much nicer noise and revs more freely. This is an old-school V8 soundtrack that any true muscle car fan would love. There’s that deep, guttural V8 rumble at low rpm that builds to a mechanical scream as the revs pass 6000rpm.

It’s the type of engine you just love to let rev freely, keeping your right foot buried whenever circumstances allow and running it all the way to the redline. 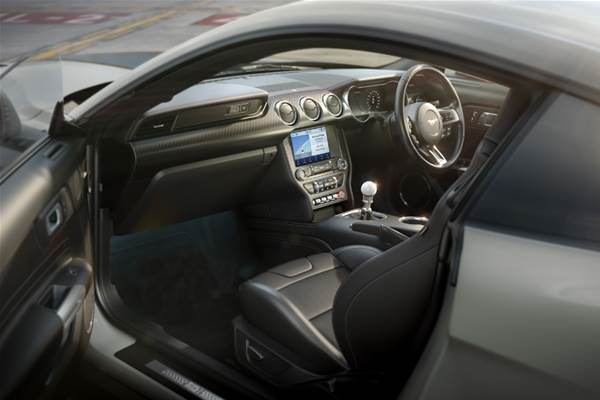 The interior is a nice combination of retro looks and modern technology.

The engine is paired to your choice of either a six-speed manual or 10-speed automatic transmission, and while purists will likely opt for the manual (and it’s a great gearbox) you shouldn’t dismiss the auto.

The manual is actually the same Tremac unit Shelby uses in the GT350 but for the Mach 1 it has two special new features - ‘auto blip’ on downshifts and the ability to ‘flat shift’ when going up through the gears.

The auto blip isn’t a new feature, several other cars have what’s more commonly referred to as ‘rev matching’, which basically makes you sound like a professional at heel-and-toe when you slot into a lower cog.

The ability to flat shift, though, is a much rarer piece of tech in modern performance cars. In simple terms it means you can keep your right foot pressed hard down on the throttle pedal and simply dip the clutch and pull another gear at the same time. It’s a racing-style system that is designed to minimise any lost acceleration on upshifts.

However, unless you’re a racing driver you’ve probably not experienced anything like it in a road car before and it can be an unusual sensation if you’re the kind of driver who has mechanical sympathy. It feels very unnatural but once you get your head around it, it does add to the driving experience.

As for the automatic, while it may not be the most engaging choice for enthusiast drivers, but its wider spread of ratios impressed on the track and make it worthy of anyone’s consideration. On the road it prefers to hunt for the tallest gear in general in the name of reducing fuel economy, but when you use the paddles on the back of the steering wheel it gives much more flexibility on the track or a twisty road.

As for the handling, the Mach 1 is clearly the pick of the current Mustang range thanks to its tauter, more controlled suspension and more responsive steering. On the road it feels more composed and refined than the GT. 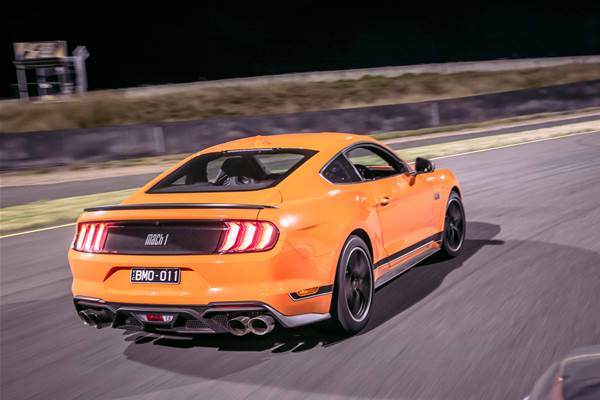 The Mustang Mach 1 is one of the few remaining muscle cars available today.

On the track it’s a whole different ball game, with the performance upgrades really shining through. The changes translate into the most dynamic and responsive Mustang I’ve driven to date.

On the twisty and technical Amaroo layout at SMP  it feels sharper and more direct than the GT when you tip it into a corner, which allows you to position the Mach 1 with more precision. It also feels more stable through the corner and that allows you to feed on the power easier on exit.

It’s an impressive machine on either the road or track, and while its $83,241 asking price (which excludes any government or dealer charges) will sound steep, the return on performance for your money is hard to beat in the current environment. Performance cars are a rare breed and especially V8-powered muscle cars like the Mustang, as the world moves towards electric vehicles in an emissions-focused world.

So if you want to experience a modern take on the old-school muscle car formula, the Mustang Mach 1 is the car for you.