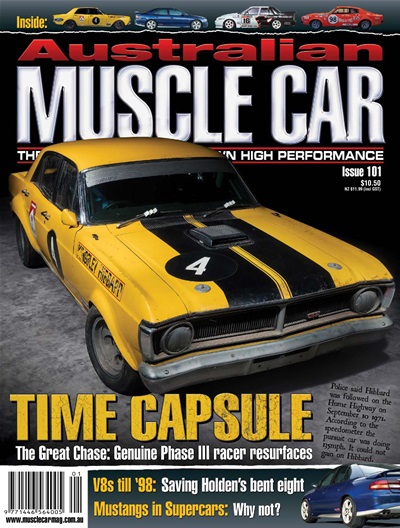 Muscle News
Ford Australia continues to reject pleas to allow its Mustang – or any othercurrent model – to be represented in the Supercars series. AMC investigates theimpasse and wonders whether there is another way forward.

Muscle Maniac
A legendary Holden Monaro from New Zealand’s storied muscle car past has beenresurrected and returned to the track. Plus My Muscle Car and Auction Update

Columns
Bob Morris is our new legend columnist, while we welcome back Aaron Noonan

V8s till ’98
Holden’s very own V8 engine came under serious threat in 1984. But then the cavalry – armedwith typewriters and a catchy tagline – arrived to rally the troops and save the day.

Time Capsule
A genuine XY Falcon GT-HO Phase III hidden away for four decades – a relic from racing’sglory days frozen in time – is now back in the spotlight revealing its intriguing back story.

My Muscle Car
My Muscle Car has expanded for 2018. Check out our six-strong line-up of readerrides from page 72 – old, not so old, Ford, Holden and Chrysler.

Sacred Sites: Winton
Winton has never pretended to be a Sandown or a Phillip Island. What Wintonalways was – and still is today – is the little circuit that could.