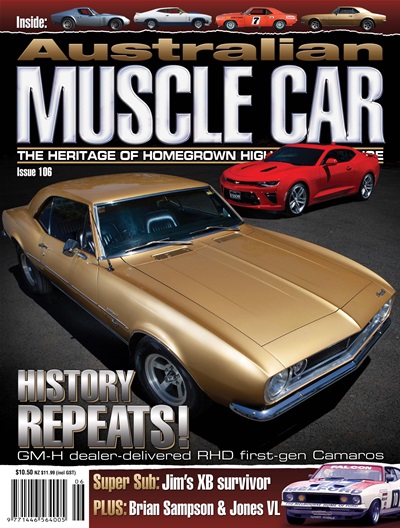 Muscle News
Why the Mustang Supercar looks like it does, and why it won’t be joined on track by the Camaro.

Muscle Maniac
The annual Brocktober gathering, and the tale of Ron Dickson’s ‘racecam’ in the ‘73 Great Race.

History repeats
Brand new Camaros converted to right-hand drive and sold in Australia by Holden dealers is nothing new – they were doing it 50 years ago when the original series Camaro came out.

Muscle Man – Brian Sampson
The long career of ‘Sambo’ took in a lot more than simply that ‘75 Bathurst win with Brock.

Richo’s first tourer
The story of Jim Richards’ XB Falcon Group C – and the various other stars who raced it.

My Muscle Car
AMC readers show us their muscle cars.