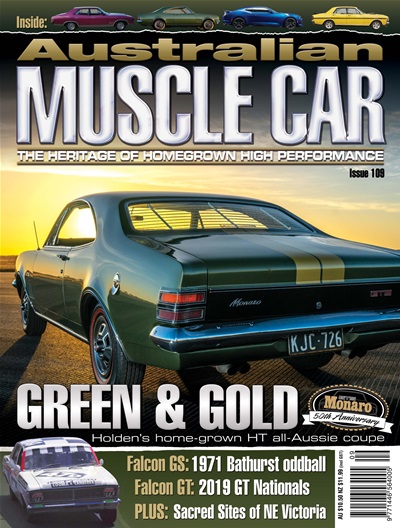 Cover story: HT GTS Monaros
Monaros served for little more than two years as Holden’s front line motorsport contender but the big V8 coupes enjoyed enormous success in that short space of time. And the General got it just right with the second series Monaro, the HT model.

Bathurst Bond
‘Bathurst Bond’ was the name they were calling Colin Bond after his and Tony Roberts’ victory in the 1969 Hardie-Ferodo 1000 in their HDT Monaro. Here Bond reflects on the whirlwind of success that he enjoyed upon becoming a factory driver for Holden that year.

Muscle Man – Ron Gillard part 2
Not a household name but Ron Gillard has played some important roles in a long career in motorsport. This issue Ron tells us about the cars he’s prepared and teams he’s worked for.

Sacred Sites
A racing historian once wrote that race tracks were sprinkled through NE Victoria in the late 1950 and early ’60s “like currants in a bun!” An apt description for the Ovens Valley!

Falcon class act
A lone 351 V8 Falcon XY in a field of six-cylinder Toranas and Chargers sounded like a potential class D-winning proposition at Bathurst 1971 to Gerry Lister and David Seldon. It was a good plan, but sadly the pair just didn’t get the right breaks – or the right brakes.