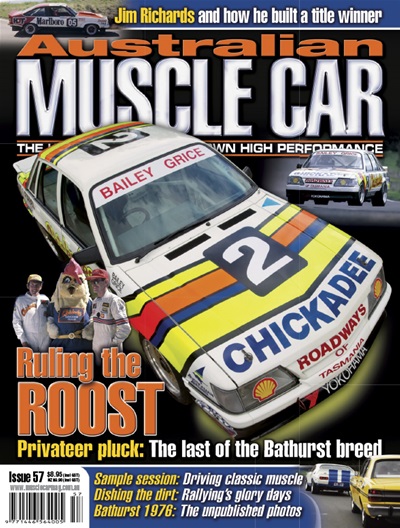 Joe Kenwright is the man with more leads than Pets ‘R’ Us. Joe reveals the problems Ford faces with its busy rollout of new models. He also considers Holden SV6 ute’s performance and practicality credentials. Meantime, muscle maniac James Cockington notes auction prices are rebounding for prime nameplates. He uncovers a ‘bribe to subcribe’ A9X with 14km on the clock!

This issue readers: recall Tony Edmondson’s 1979 Surfers Paradise crash; reveal more about the Mad Max Interceptor’s ‘afterlife’; highlight a Malaysian Torana GTR (pictured right), and tell us more about a proposed Queensland racetrack. Meantime, others readers request more information about their cars in Muscle Assist. After all, readers are the best researchers.

JB tells us about his awkward teen years, when he lusted after some classic Aussie cars. He also recalls his involvement in tuning the suspension of the early Ford Performance Vehicle models and believes that our country produces some of the world’s finest muscle cars.

Historic tin-top racer Paul Stubber recalls more from his first trip to Bathurst, in 1992. He provides an insight to why the Group N ranks are bursting at the seams. Maybe it has something to do with quality of the end-of-day barbeques, despite the presence of the inevitable ‘BBQ experts’.

The Touring Car Masters’ V8 Charger ranks are about to swell from one to three. In doing so, the age-old Charger question will be reignited: would a V8 have been a better Great Race weapon than the six? AMC also notes the career – and current day – achievements of TCM Camaro driver Andrew Miedecke.

AMC has obtained previously unseen documents outlining what Al Turner was originally planning for Ford’s 1971 frontline fighter. Joe Kenwright investigates the early plans for a smaller US-based coupe and reveals why Ford opted for the GT-HO Phase III. We examine the finished product.

An unauthorised race from Melbourne to Perth for a motley group of cars. The winners flew under the radar to steal victory, despite a farcical ending. AMC has dug up details.

Kiwi correspondent Steven Holmes takes a close look at the car that helped kill the country’s home-grown production car class in the early 1980s, the NZ VH Commodore SS. Not only did Peter Brock play a key role in its development, he drove it to victory too. What? You haven’t of this 30-run production-line special?

The days of car dealers backing race teams are long gone. More’s the pity when you consider how Max McLeod used his association with John Goss to good effect. AMC tracked down McLeod to reminisce about the glory days of race on Sunday, sell on Monday, and that Bathurst win in 1974.

AMC showcases the latest model releases from Australia’s gun diecast companies, including the first 1:18 scale Formula 5000s. We also take a look at what Phase III models are available. So don’t despair if you can’t afford a real XY GT-HO.

A minute’s silence please for dearly departed. This is the section that breaks our heart every time, but you guys love. Now, where’s that number for Russell Ingall’s Car Protection Agency?

We have some housekeeping to do. AMC has tracked down one of WA racer Graeme Hooley’s old Commodores and his A9X. We also report back on our efforts to find the yellow four-door Max Max MFP interceptor.