This issue, readers recall: the McGrana Torana towing marathon, Wellington street races and classic Chargers; and give us some left-field ideas for future features. Muscle Assist has some mysteries to solve.

Parnelli Jones called it “the greatest road racing series ever run in the States”. No arguments from us. Nor from the surprising number of Australian drivers who drove in Trans-Am.

Did you know that Allan Moffat and Harry Firth were once co-drivers in Trans-Am? These supposed rivals share some little-known stories with Steve Normoyle. They joined forces to take on the big guns on their home ground.

Horst who? Paul Newby tracks down the muscle car star from Cooma NSW, Horst Kweck, who’s a Trans-Am legend in his adopted country.

History can repeat itself: witness the swag of original Camaros, Javelins and Mustangs running in the USA’s Historic Trans-Am Series. And they could be headed downunder sooner than you think.

Australian Trans-Am Championship organisers are going all out for bigger and better things in 2012, the tribute category’s fourth season.

AMC’s Paul Gover provides an intriguing insight into Nissan’s rationale for returning to the top division of motorsport in Australia. V8 Supercars here they come.

James Cockington takes us behind the scenes of ‘Hollywood’ George Elliot’s amazing half-century of non-stop action, on and off the track.

David Cook takes us back to a time when racing was simple, cheap and fun – and discovers it still is! Welcome to the world of Nostalgia drags.

Ill-fated, or simply ahead of its time? James Cockington looks at the audacious plan to produce a luxury sports car, with Leyland P76 V8 power, in Melbourne in the 1970s.

One of our classics – Bruce Moxon – reports on the cars and characters at Australia’s biggest historic racing event, on Phillip Island. No penguins allowed.

With the Formula 5000s making their thunderous debut at this year’s Muscle Car Masters, AMC revisits the 1975 Tasman Series and a unique Australian victory.

Imagine being asked, “Anyone in the market for a HK Monaro GTS 327?” Read the dream-find story that recently lobbed on AMC’s doorstep.

We’ve bloody-well found the bloody Volvo from Bathurst 1979. You bloody beauty. Uno, the little Fiat that raced in ’86? U do? We’ve found that too. 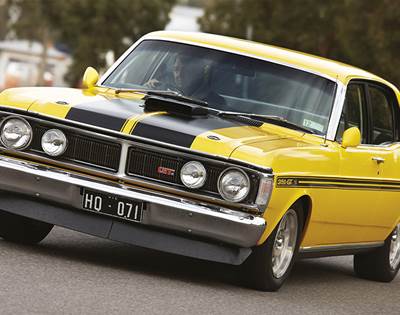