Letters
This edition readers react to Ford’s factory closure and the impending death of the Falcon. They also teach us things about Jim Palmer and VL Walky Commodores. Meanwhile, others ask us about Dick’s old rock car and their old rides.

Columns
Fred Gibson reports in from the Falcon GT Nationals where he was reunited with an XW GT-HO he used to service, while Phil Anders recalls his dalliances with VL Commodores. Guest columnist is Heritage Touring Cars head honcho Ed Singleton.

Holden EH S4
The S4 was a clandestine attempt to win the 1963 Armstrong 500 enduro. But its ‘cooking model’ appearance meant few would be preserved. We profile the only one to be unearthed in 10 years.

Muscle Man
Fred Morgan is the forgotten man of Holden’s distinguished Bathurst history, despite being runner-up in the inaugural October classic. Fifty years on, we had the pleasure of meeting the former weekend warrior.

XB Falcon GT
Aaron Lofts celebrates the 40th anniversary of the last of the classic Falcon GTs and presents 40 reasons why the XB GT holds a special place in the Blue Oval’s muscle car history.

Bathurst 1978
“The Hardie-Ferocious 1000” would have been a more appropriate name for the 1978 Bathurst classic – a hard-fought battle of the two-doors, until Ford’s attack went up in smoke.

Hard Charger
It’s raced and survived the Bathurst 1000, the Australian Rally Championship and Calder’s quarter mile. James Cockington unearths one Charger with a varied past.

Punter Pics
You send, we print. Our newest regular section has been a big hit. This edition we’ve got pics of the only XA GT-HO Phase IV built for the road.

S Car Go
Paul Newby says that Group S is to sports cars what Group N is to touring cars – cars that punters can relate to with real, no-holds-barred racing... and some surprising muscle.

Out of Action
And now for the segment that you love and we loathe… whoops, we’ve got Out of Action confused with Hey, Hey It’s Saturday’s Red Faces. Nonetheless, here are some cars that have received the automotive gong and others that might be spared.

MIA
Last issue, we were looking for HSV’s 1988 Bathurst cars. This issue, Aaron Noonan finds one – the #10 car of Larry Perkins and Denny Hulme – which almost became a Sports Sedan! 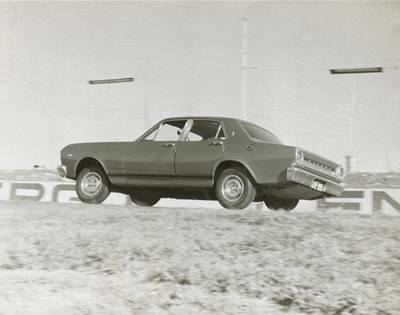