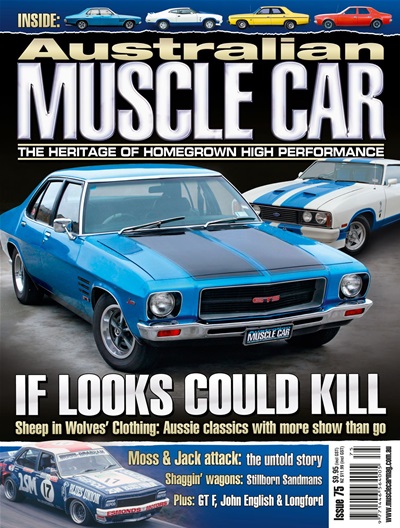 Muscle News
It was with a heavy heart that we headed to Ford’s You Yangs proving grounds to sample the last ever Falcon GT – the FPV GT F. Suggested song to play in your head while reading this section: ‘Say Goodbye’ by Hunters and Collectors.

Muscle Maniac
What would it be like to have your home destroyed by fire? This is a constant worry for those who live on rural properties and have a shed full of expensive classic cars. On such victim tells us his story.

Column
Fred Gibson, in his exclusive AMC column, highlights the contributions of those behind the scenes at Gibson Motorsport. Theme song: anything from Right Said Fred.

HQ Monaro GTS 4-door
Our first sheep in wolves’ clothing. If ever there was a volume booster dressed as a muscle car it was the HQ GTS 4-door in docile 253ci V8 automatic form. Theme song: Heart’s 'If Looks Could Kill'.

Falcon Cobra 4.9-litre
As our most distinctive sharp-looking sheep, the 4.9-litre Falcon Cobra auto is one serpent whose hiss is worse than its strike. Theme song: ‘The Serpent’ by Genesis.

CM Valiant GLX
Chrysler’s last-gasp clayton’s sporty was the CM Valiant GLX, the vast majority of which were automatic six-cylinders Theme song: ‘The Last Time’ by The Rolling Stones.

Muscle Man
We can’t say Queensland racing stalwart John English’s name has gone up in lights, but he has lived his racing dreams for over four decades. And he’s spent much more than seven bucks a night... on his racecars, we mean! Theme song: ‘Hollywood Seven’ by Jon English. Of course!

Sandman
To mark the fabled Holden Sandman’s 40th, AMC shares some never before published designs for the iconic panel van that ended up on the cutting room floor. Theme song: ‘Mr Sandman’ by The Chordettes.

R-Rated
AMC's new section for mature, open-minded readers only. This edition we discuss the common heard: “When the company was finished with these cars they were either crushed or run into the barrier at the proving ground.” Theme song: REM’s 'Orange Crush'.

Brabham Moss
How did the Bathurst 1976 dream team of Jack Brabham and Stirling Moss come about? And what became of the Torana they raced that day? AMC presents the real story behind the much-hyped campaign. Theme song: the number 1 single on 2SM’s Top 40 chart on October 3, 1976, Abba’s 'Dancing Queen’.

Savy Motorsport
With multiple championships under his belt, master engine builder Dick Savy is quickly building a name for himself. Theme song: anything from pop sensations Savvy.

Sacred Sites
We check out what remains of Longford, Tasmania. It was amazing that racing on this public road circuit lasted for as long as it did. Theme song: ‘Don’t Tear It Down’ by Spy vs Spy.

Cars that won Bathurst
Our series on the cars that have won the Bathurst classic continues with the Sierra that was an unlikely race victor in 1988. Theme song: Boz Scaggs’ ‘Sierra’.