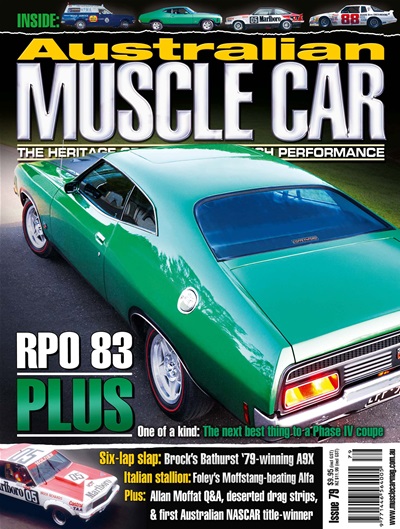 Muscle News
The Commodore nameplate lives beyond 2017; testing of that all-new (imported) model underway at Lang Lang; Holden-penned superstars steal the show; and timing of the first Australian deliveries of the 21st century Ford Mustang. Beverage to consume while reading this section: Victoria Bitter.

Muscle Maniac
Ted Bullpitt would be proud as we recall when Bathurst was Kingswood country; the Bib Stillwell Special XA Fairmont; AMX survivors; and another Tasman Bridge disaster survivor. Beverage: Reschs DA... and leave your money on the fridge.

Muscle Mail
Readers show their love for John Goss the man, his racing endeavours and the John Goss Special Falcons. Oh, and comment on other past AMC yarns. Beverage: JG’s cuppa of choice, chai tea.

XA GT RPO 83 ‘Plus’
Incredibly, this magnificent XA GT coupe was virtually unwanted early in its life for reasons including engine behaviour that suggested, to the uninitiated, major internal woes. Those unorthodox noises hint to secrets that lie within. Beverage: any good Coffey, err, coffee.

Cars That Won Bathurst
One of the most celebrated Bathurst 1000-winning cars, the A9X that won in 1979 remains one of the most lightly-raced Great Race victors. Beverage: a cup of herbal tea in a HDT mug.

Posters
One side features a stunning studio shoot of Peter Brock’s 1979 Bathurstwinning Torana A9X and the other displays our cover car, the Calypso Green XA GT RPO 83 ‘at home’.

Muscle Man Moffat
In the third and final part of our Allan Moffat profile, we fire some probing questions at the four-time Bathurst and ATCC winner. His answers provide an insight into what the makes the racing great tick. Beverage: Canadian Club and Coke.

Sacred Sites
AMC has reached the halftime break in our review of defunct race circuits of the muscle car era. During this intermission we switch our attention to the major metropolitan drag strips that have passed into history. Get set for some incredible shots from the quarter-mile sport’s earliest days. A minute’s silence please. Beverage: any top alcohol.

V8 Sleuth
Peter Brock spent seven years in racing exile from Holden. One of the cars he drove during this period, the Advantage Racing Commodore VP of 1993, is now back in its country of origin after the best part of two decades in New Zealand. Beverage: a cup of herbal tea in an Advantage Racing mug.

R-Rated
Chrysler had a history of dropping the ball on regular occasions when it came to marketing. Why it happened with such monotonous regularity is a mystery. Beverage: West End Draught from a ring-pull steel can.

NASCAR title-winner
It’s 25 years since Australia’s first NASCAR champion was crowned. Fittingly, the winning car is displayed in a Launceston museum, in the livery of its greatest achievement down under. Yet, before this car came to Australia, it had already created history in the USA. This story has nothing to do with Marcos Ambrose. Beverage: Budweiser, of course.

Back on the road
It’s not a muscle car, but it’s helped keep plenty of muscle cars on the road over the years. A small but important part of Australia’s motoring history has been preserved. Beverage: KB Lager.

Italian muscle
The Improved Production era saw big V8s battling it out, with smaller machines nipping at their heels, like Brian Foley’s Alfa GTAm. Foley soon bought into the ‘big into little’ mantra by fitting a V8. Beverage: macchiato.

Capri Capers
What was Ford’s caper when it imported 50 Capri RS3100s back in 1974? Was Australia just a dumping ground for a model unwanted by UK buyers or did local racing chiefs have an ulterior motive? Beverage: a warm pint.

Punter Pics
Reader Garry Kirk has sent us pics of just about every car he has ever owned. Plus Richard Orr’s pics from Bathurst 1979.

Out of Action
The segment we loathe but you love... no, wait, that’s Red Faces from ‘Hey, Hey It’s Saturday’. Beverage: Bluetongue.

Whaddayaknow?
We’re keen to nail down exactly which chassis graced the Bathurst 1000 grid more than any other. Whaddayaknow? Beverage: Tooheys.