Muscle News
As Australian car manufacturing winds down, it's reassuring that localcomponent makers are gearing up export programs. Such is the case with aGeelong company's contribution to the 2016 Shelby Mustang GT350R set forUS release. Beverage to consume while reading this section: Little Creatures.

Muscle Mail
Lots of feedback to last issue's Star Cars features, especially from ownersof the six cars we shone the spotlight on. We've uncovered some real gems.Beverage: A six-pack of Stella.

Columns
Few people are as qualified as Fred Gibson to speak about motorsport'sfuture. Meantime, Paul Gover incurs the wrath of more car company chiefs.Beverage: Any stiff drink that will help you cope with the current state ofmotorsport in this country.

Bathurst 1977
The 1-2 finish at Bathurst in 1977 was undoubtedly Ford's finest achievementin Australian motorsport. We revisit this amazing race, the cars involved andspeak to the gurus who made it happen. Beverage: KB Lager - so 1970s.

Posters
One side of our poster features Bob Jane's fearsome 1969 427ci ZL-1Chevrolet Camaro, winner of the 1971 Australian Touring Car Championship.No prizes for guessing what's on the reverse side given our cover story.Beverage: Coca-Cola.

Muscle Man
Brad Jones is rare among touring car drivers of his generation for hisbackground and achievements. So many good stories to be told. Beverage:Albury's Cheeky Peak Brewery's OMFG! Aussie Lager. (True, look it up.)

Muscle Traveller
The story of an evolving 24-hour spec V8 Supercar raced on the other side ofthe world, at the notorious Nurburgring, and run out of a backyard shed. Thisvolunteer effort borrowed from GRM's Bathurst 24-Hour Monaro expertise.Beverage: Bitburger or Beck's.

Top 25
Eighty-three issues - and counting - of this magazine is testament to thiscountry's rich heritage of homegrown high performance. We name our top 25most desirable Aussie-built muscle cars of the classic period - 1967 to 1978.Beverage: A batch of home-brew.

V8 Sleuth
Behind the scenes of Legends of Motorsport (Series Two) with one of itsstars, V8 Sleuth Aaron Noonan. It's the TV show that brought together theamazing motorsport video vault of Seven Sport with our sport's biggest names.Beverage: Sherlock Lager.

R-Rated
Ford's XY Falcon GT-HO Phase III may be king of Australian muscle cars interms of speed and machismo. But when it comes to bang for your buck, thePhase III was a fair way down the grid. Beverage: Rated R Rye Pale Ale.

The Life of Brian
As a staple of the Queensland motorsport scene, Brian Michelmore has playeda role in some of touring car racing's greatest - and not so great - moments.Beverage: A cold offering from the Church of Four Crosses.

Mini Muscle
The latest releases in miniature. Put your order in for Christmas now.Beverage: Twist-tops - gettit?

Out of Action
The segment we loathe but you love... no, wait, that's Red Faces from 'Hey,Hey It's Saturday'. AMC reader Shaun Dunford reports in from a mass auctionof Aussie classics in western Victoria that will give many an idea what theweathered classic in their shed might be worth. Beverage: Bluetongue.

Whaddayaknow?
Our hunt last issue for signature edition one-offs brought some someinteresting cars and stories out of the woodwork, including a Brock Fairlanethat was formerly a magazine prize and a Falcon that was owned by Brocky'sbusiness partner. Beverage: Your shout. 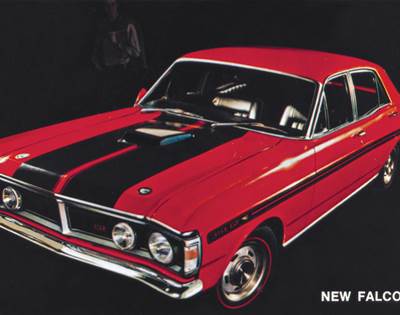