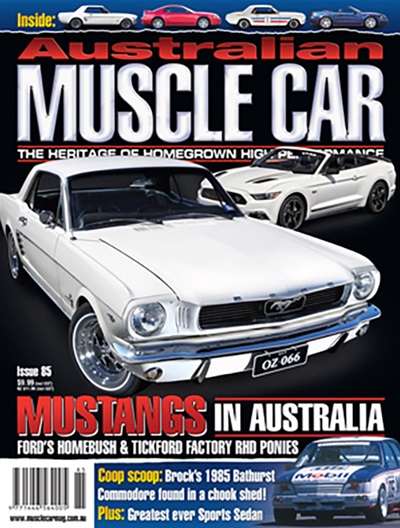 Muscle News
Hot off the ship: lots of 2016 Mustangs for Aussie buyers, just in time forChristmas. Hot off the press: will Buick's LaCrosse replace the Commodore?Walkinshaw takes a new tack with RAM truck conversions.

Muscle Maniac
A special Auction Update profiles the remarkable cars Graham Alexanderhas put on the block. There's a Monaro GTS 327, A VK Brock CommodoreGroup A, an XU-1 Torana and more.

Muscle Mail
Our letter-writers are devils for details: the flags on Moff's Falcon; tips forTorana restoration; help with XW and XY Falcons; and a mysteriouslymarked hubcap.

Homebush Mustangs
How would you sell the new 1966 XR Falcon to Aussie car-buyers? Simple,put a right-hand drive converted US Mustang in every Ford showroom.Believe it or not, it worked.

Tickford Mustangs
If you wanted a Ford Australia-delivered RHD Mustang in 2001, this wasthe only way to go – a full conversion, by Tickford no less – for no less than$85,000. These cars are now being appreciated more widely.

Buying an old 'Stang
So you want to buy an old Mustang? Import or buy locally? Convert orleave as a left-hooker? These, and other curly questions, are fielded by anenthusiast who's ‘been there and done that'.

Top 25 racing Mustangs
We name the top 25 competition Mustangs with Aussie connections; somemore successful than others, but all notable contenders.

Muscle Man
In mid-1960s Hobart, Garth Wigston made his mark in touring cars and pavedthe way for other Tassie wheelmen like Bowe, Parsons and Ambrose.

Chook Shed Commodore
The ultimate barnfind: we confirm that the Group A VK roosting in a Victorianfarmer's chicken shed really is Brocky's 1985 Bathurst entry.

Ten years of GT3
The GT3 class has been a revelation, but will the fun continue?

Ricciardello Alfa
Quite simply the most succcessful Sports Sedan of all time.

Slotcar renaissance
They were big 40 years ago and now they're back, this time with classicAussie touring cars and the latest scale-model technology.

Sacred Sites
Not so much sacred, as stillborn: we reveal street circuit ideas that neverbecame reality, but could have made history.