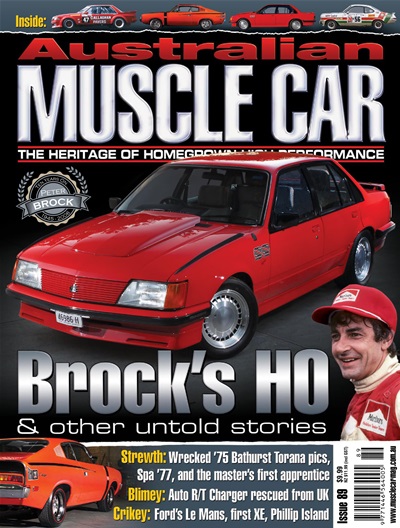 Muscle News
Falcon Place, Capri Court and, erm, Fair Lane could all become part of a newlandscape at Broadmeadows and a farewell party is planned in October for thefamous factory. We also report on Ford’s retro-flavoured Le Mans attack.

Muscle Maniac
A GT-HO Phase III that headed to the Dark Continent when brand new isnow back in its homeland; a song about the XU-1; and a Monaro GTS 186Sattracts big dollars at auction.

Muscle Mail
Readers got a bit stroppy with AMC about the Bathurst privateers that gotleft off our Top 25 list last issue. Great to see such passion for the humbleprivateer. Lots of other feedback on our recent stories.

Brock’s VH Group 3 HO
The king of Brocks? We begin our series of ‘untold stories’ with a virtuallyunknown Brock Commodore that’s lived in the shadow of more famous HDTSpecial Vehicles. But shouldn’t.

Brock’s 1975 Torana
Whatever happened to Peter Brock’s 1975 Bathurst-winning Torana L34?AMC has tracked down the very man behind the wheel when this famous carwas destroyed. He tells his story for the first time.

Top 25 Brock pics
25 shots of Peter Brock that you’ve probably never seen before. So go fillup the urn, grab a cuppa and check out shots of his Ford T-bird NASCAR,bucks night and Dicky Johnson kneeing the King in his crown jewels.

Posters
We have revamped our back issue service so it’s now even easy purchasethem online, checkout our poster for the Brock issues still available. Theflipside is a more traditional poster.

Muscle Man
The master’s first apprentice, David Parsons, was truly ahead of his time. TheTasmanian’s career story is remarkable for the challenges he faced, includinglearning his trade when the greats were at their peak.

Brock’s at Spa ’77
Brock’s best overseas performance is well known to many long-time racingenthusiasts in the Old Dart, but largely unknown in his homeland. It’s the storyof the dashing Aussie race driver who partnered a prickly, overweight Pommie.

R/T Charger auto
A chance discovery in a Welsh wreckers’ yard revealed not only the rarest ofall Australian muscle cars, a one-off Charger R/T auto, but also led to a rescuemission and, ultimately, to an ambitious restoration.

Historic Sports Sedans
Despite a growing interest in Sports Sedan racing’s glory days, the HistoricGroup U category has been struggling to gain traction. Just a handful of carshave been log-booked. AMC investigates.

Life of Brian’s XE
Brian Callaghan was the first to put an XE Falcon touring car onto a racetrack,a car that started and finished three Bathurst 1000s. That same one-ownerFord is about to return to the track for the first time in decades.

Muscle Car Run
AMC magazine has been a regular attendee of the original Aussie Muscle CarRun, in South Australia. Here we hitch a ride on the inaugural Victorian event.

Sacred Sites
This is the story of how the reincarnated 4.45km Phillip Island Grand PrixCircuit came into being.

Out of Action
Overlooked, overcooked and ‘over-chooked’ surviving classics from ourmotoring past – sniffed out by AMC readers.

Whaddayaknow?
The day they raced Oran Park in the opposite direction.