Quite a few Falcon V8s were prepared for speedway racing in the early ʻ70s, when racing was held mainly on small dirt tracks. This one was considered significant enough to be photographed in virgin condition, before it went out and got its first few dings. 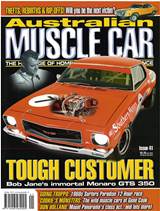 The proud driver is Jeff Muller and the photo is thought to have been taken at Liverpool Raceway in 1970 or ʻ71 when this XT Falcon was only two or three years old. The usual deal was to wait until something good turned up at the local wreckerʼs yard then rebuild it and install a tough V8.

But there are also stories (maybe true, maybe not) of near-new dealer demonstrators being bought and turned into instant dirt trackers.

During this period of speedway muscle, a typical sedan feature race would include five or six Monaros, three or four Falcons, a couple of Toranas and maybe a Mustang or two. There was one speedway Charger R/T running in Sydney and a couple of Pacers in Adelaide.

The star Falcon driver on dirt was Rick Hunter. His yellow GT, prepared to ʻHOʼ standards, waged some memorable battles with Peter Crick in a blue Monaro GTS, which was later replaced by an even faster Torana XU-1.

Makes you wonder if the really big crowds would return to speedway if they ran the modern equivalent of cars like these?

Mad Max and the Superbird that rules Sydney's Speedway scene