The Chevrolet Camaro is returning to Australian racetracks, with the reveal of the 2023 Gen3 Supercar at Bathurst recently. So it’s the perfect time to celebrate the most famous Camaros to have graced our tracks over the years.

The all-alloy 427ci Camaro ZL-1 was the pinnacle of Chev performance in 1971 (and for years after!). It’s a credit to Allan Moffat that he was able to take Bob Jane down to the wire for the ’71 title despite Moff’s Boss Mustang giving away a full two-litres’ engine capacity to the Camaro. CAMS evened things up for ’72 by forcing Jane to revert to a cast-iron 350ci but it made no difference to the result. Jane and the red Camaro earned the unique distinction of claiming consecutive ATCC using two completely different engines. 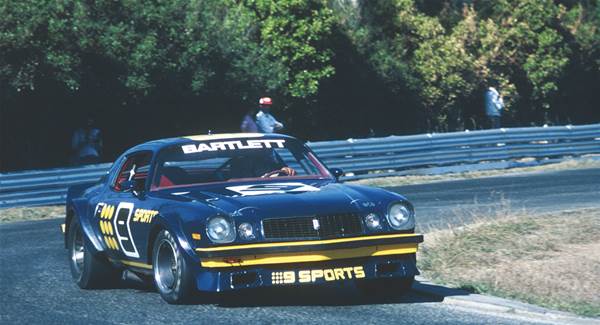 Get something different. That was Kerry Packer’s advice to Kevin Bartlett when the media mogul offered to sponsor KB’s switch from Formula 5000 to touring cars, and after contemplating a BMW 635, Bartlett opted for the Camaro (Big Rev Kev’s Chev only became eligible when CAMS opened up local touring car racing to imported cars in ’79). While it was initially hampered by mandated rear drum brakes, it was a competitive and exciting addition to the ranks – and Bartlett steered it to that magical pole lap at Bathurst in the wet in ’81.

In ‘68 Bryan Thomson sourced an LS-7 optioned Camaro from the States to replace his ex-Beechey Mustang. It started out as a 396ci Big Block with alloy heads but was later stretched to 427 – and 620hp! Not surprisingly, the mustard-gold coupe was quick, but also more than Thomson’s budget could handle. It tore up Muncie M21 gearboxes like they were going out of style, but the big problem was the cost of US-sourced spares. Eventually Thomson got together with Peter Fowler and built something a bit more ‘local’, a Chev-powered XU-1 Sports Sedan.

When the Chev Nova failed at the not inconsiderable task of beating Ian Geoghegan’s Mustang, Beechey got a Camaro (and ‘demoed’ it as a road car at the Calder May meeting). As expected, a Camaro in Beechey’s hands was a formidable weapon; in that year’s single-race ATCC he was trailing Geoghegan by only a few seconds when a mechanical issue sidelined the Chev. But Beechey didn't go on with the Camaro much longer – the deal with GM-H to develop the new Monaro for Improved Production was in place even before the Camaro hit the track. 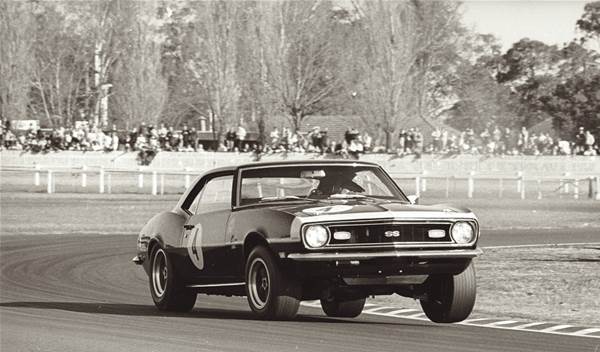 Norm Beechey tried the Camaro before switching to his famous Holden Monaro.

Terry Allan wasn't a star driver but he does have the distinction of being the first to race a Camaro in Australia, at Calder in May, ’67. Terry bought himself a brand new 327ci ’67 Super Sport (seen here on arrival in Australia), but before it left the States it went to Bill Thomas to be modified for racing – which included the fitment of a 396ci engine. It wasn't hugely successful, but it was quick enough to be of notice to Allan Moffat, who protested the Camaro’s rear disc brakes at one meeting – much to Allan’s annoyance.

In the early ‘70s Adelaide racers John Kay and Tony Bowden were co-proprietors of the Indy Speed Shop. Their specialty was RHD conversions of American muscle. In 1971 they spent a small fortune building up a Camaro for Improved Production but by the time the car was finished, at the end of ’72, so was Improved Production. Still, as a Sports Sedan it looked magnificent in Winston Filters livery – even if their ‘support’ was little more than free fags… Kay and Peter Finch shared the driving; later it was sold to David Jarrett.

The shift from Improved Production to Group C touring cars in 1973 spelled the end for Bob Jane’s Camaro (it was famously disqualified from the ’73 ATCC round at Calder where Jane tried to run the car). It was sold to Jim Smith, who converted it to a Sports Sedan, chopping the firewall and transmission tunnel so a Weslake-headed 350ci Chev could be mid-mounted (in classic Sports Sedan fashion). In Sports Sedan form it never emulated Jane’s Improved Production glory days, but didn’t it look a treat in those lurid Camel Filter colours! 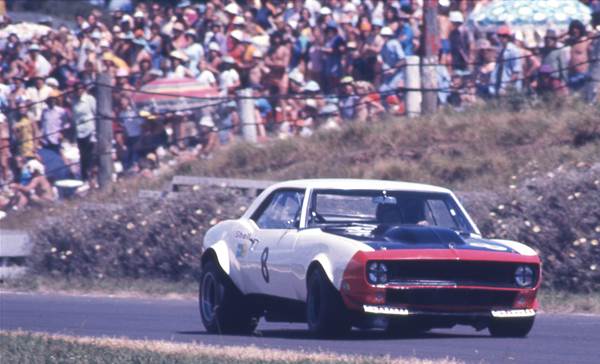 Not bad for a used car - Frank Gardner brought his British Camaro to Australia to race in the summer.

Frank Gardner had retired from openwheeler racing by 1973 but the-then UK-based Australian nonetheless still made the trip home for that year’s Tasman Cup, as he was Lola’s development driver. Frank’s other gig at the time was factory Camaro driver in the British Saloon Car Championship. He had just updated to a new Camaro (fitted with the 427 engine from Jane’s car) and was apparently gifted the older, earlier model, which he brought along for the Tasman support races. It was competitive down under, defeating Moffat’s Mustang in their second encounter at Pukekohe.

Dickson brought in two cars, and like Bartlett was forced by a quirk in CAMS rules to retro fit his ’78/’79 Z28s to ’74-‘77 front and rear bodywork. As a part-timer Dickson wasn’t the competitive force that Bartlett was in the Channel Nine Camaro, but he did make Hardies Heroes in 1981, and the following year matched Bartlett’s best result at Bathurst in a Camaro, 11th place. Dickson also famously (or infamously) had Australia’s then-recent World Drivers’ Champion Alan Jones drive the second team Camaro in a deal that lasted just the one Amaroo Park weekend. 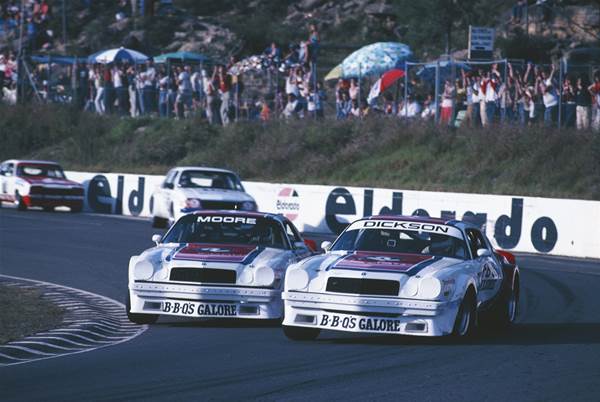 What's better than one Camaro? Two, Ron Dickson brought in a pair of '70s Camaros for local racing.

There were two Bob Jane 427 ZL-1s. Jane also brought in an auto version, blue in colour, which he regularly drag raced during 1970 and ’71. The Chev coupe was in its element on the quarter mile – after all, the ZL-1 option pack was conceived specifically for drag racing: a lightweight, stripped out, ‘poverty pack’ interior version but with (of course) the 427ci alloy Big Block. Like the ATCC car, Jane eventually retrofitted it with a 350ci V8. In bog standard, 7-litre trim, it was apparently capable of sub-12 second quarter mile passes!