We've covered Holden and Ford's best, now we've turned our attention to declaring the best Australian-made Chryslers. As with our other lists, each car here was a genuine production model that could have been bought from the showroom, rather than any race-only specials. 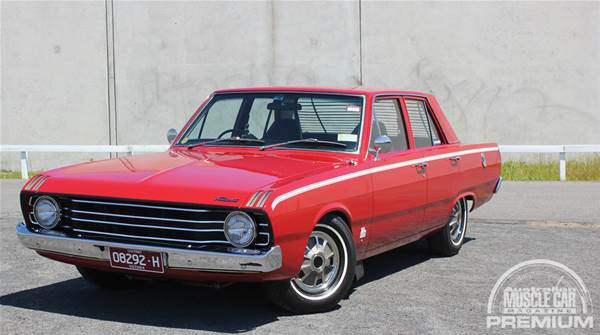 The Pacer 225 changed the brand's image in Australia.

The Pacer 225, launched in March 1969 as part of the VF Valiant range, was unlike anything Chrysler Australia had offered before. This sporting sedan – as opposed to a sports sedan – was released to help change the perception that the company made nice-but-boring middle-class cars for non-enthusiast drivers.

“We were given instructions to develop a sporty sedan,” Chrysler Australia Limited engineer John Ellis recalls of the first Pacer. “We did not have the resources to go head-to-head with Ford's Falcon GT or Holden's Monaro GTS, so we had to come up with something different.”

It was an image-booster with the RG 225ci (3.7-litre) slant-six under the bonnet with a two-barrel downdraught Carter carburettor and dual-outlet extractor exhaust system. Power was transferred to the rear wheels through an Australian-made Borg Warner three-speed manual gearbox.

Differentiating the Pacer from the rest of the range was a blacked-out grille with frills, contrasting body stripe, 'fake mag' wheel covers, 'Pacer 225' decals and a trio of bold colours.

It was quick, but no rocketship in comparison to the models offered by the parent company in the United States. However, its market success, accounting for a surprising 11 percent of total VF Valiant sales, set the ball rolling on some more serious muscle.

Today, the VF Pacer signifies the start of Chrysler's short-lived quest for a piece of the Aussie performance car pie. By dressing its ultra-conservative Valiant sedan in hot pants it started a local hot-six revolution which peaked with the one of the wildest two-door coupes in muscle car history – the R/T Charger.

Early publicity shots show the tacho positioned outside of the windscreen, suggesting the dash-top positioning was a last minute production change. 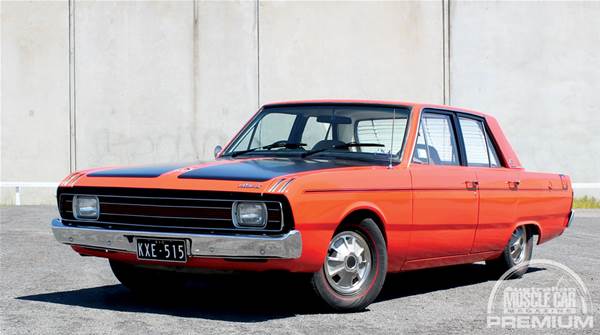 Wheels' first test of the VG Pacer, launched in April 1970, was headed: “Hemi Pacer: Family Racer”. The mag highlighted that the upgraded Pacer now had the handling, brakes and go to match its pose value.

The VG Pacer was available in two- and four-door body styles and with a choice of hot-up packages based on two-barrel (E31) and four-barrel (E34) versions of the new 'hemi' six. Both carburettors were Carters, the four-barrel being mounted on a long 'ram' intake manifold.

Both engine options were designed for the racetrack. In fact, the VG introduced the hemi engine, specifically a 245ci (four-litre) inline six-cylinder, to replace the earlier Slant Six.

The motoring public stood up and took notice when racing great Stirling Moss was enlisted to promote the hemispherical combustion chambers and their fuel-efficiency and increased power.

Racing enthusiasts took notice when humble Valiants started to harry the GT-HOs. A pair of works-entered E31 (two-barrel) Pacer finished fourth and fifth outright in the 1970 Hardie-Ferodo 500 in the hands of Doug Chivas/Graham Ryan and Leo Geoghegan/Nick Leddingham. Chivas and Ryan were just a lap down on Allan Moffat's GT-HO.

The VG was the 'middle brother' of the short-lived Pacer nameplate's three-models in a three years blitz that earned so many followers, particularly in Chrysler Australia's home state of South Australia. It's in the festival state today where the memory of the Pacer era flickers the brightest.

The 245ci VG model was the first Valiant to achieve almost 100 per cent local content. 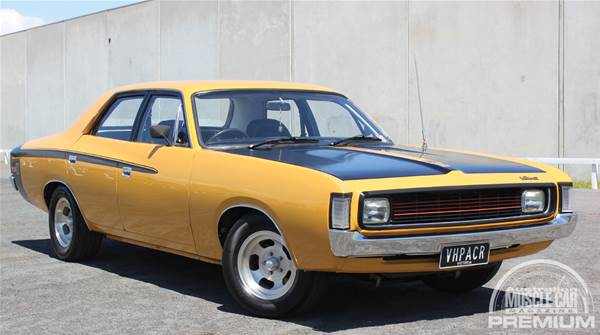 While overshadowed by the Charger, the VH Pacer was a Chrysler classic.

If ever there's an overlooked Australian muscle car it's the VH Pacer.

Launched in mid 1971, Chrysler's third Pacer model quickly fell into the shadow of the two-door Charger that took the motoring public by storm a short time later.

A key reason the VH Pacer has flown under the radar is its lack of motorsport involvement, as the Charger was Chrysler's frontline fighter on racetracks. But the final Pacer deserves its own place here thanks to its performance on the back of the 265ci engine.

Wheels wrote: “Most of the extra power of the 265 Hemi has been cancelled by the 130lbs increase in weight, but even so our test car ran through the quarter mile in 16.0 seconds... that is really quick for a big five-seater family-type car with a six-cylinder engine.”

Then there's its looks. The Pacer 265 was distinguished externally by add-on black body stripes. Across the rear-most six inches of the boot lid was a blackout stripe that wrapped around the quarter-panels and was joined by a spear that began mid-body and arched to the rear. On either side, at the trailing edge of the rear quarter-panels was a bold 'HEMI 265' decal to let the world know this was no ordinary Valiant.

The VH range was a radical departure from all that had gone before and an amalgam of Australian and American design ideas.

“At a time when GM-H has deliberately taken the other tack and produced a new car (the HQ) that looks smaller than it actually is, Chrysler is going all out to emphasise the big wedge look.”

History shows that Chrysler got it wrong, but its design emphasis has given us one of the most unique muscle car to hit Aussie roads.

One hapless VH Pacer hit the track during the 1971 Australian Touring Car Championship finale at Oran Park. In one of the most bizarre incidents in ATCC history, a spectator drove a road car – a Chyrsler press car – onto the track mid-race and did a slow lap as title contenders Moffat, Jane and Geoghegan raced on. 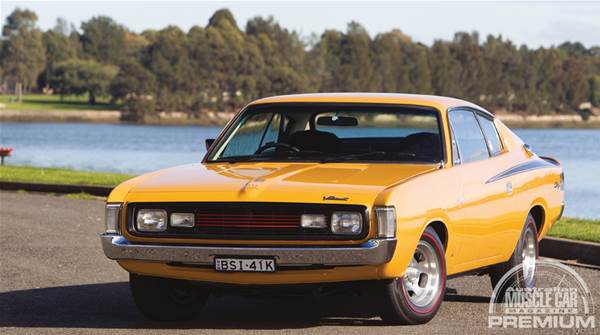 It may have failed to win Bathurst, but the Charger won the hearts of muscle car fans.

The Charger was an unauthorised side project that ultimately became one of Australia's most revered vehicles of all time. When it hit showrooms, the elite motor racing bred E38 model captured the performance-minded enthusiast's imagination.

It was an homologation special with one goal: to win Bathurst.

Starting with a R/T Six Pack, the E38 came with a 280bhp racing engine, three-speed manual and a Track Pack (with cast alloy wheels, better brakes, quick-ratio steering and, in the case of the A84, a larger 35-gallon fuel tank for racing), along with an interior dress-up package and limited-slip diff.

The Road/Track package offered unique body detailing and colours, including a blacked-out grille, vertical stripes behind the front wheel arches and black flashes that ran down the side of the vehicle before wrapping around the tail spoiler.

Hopes of a  Bathurst victory were raised when the E38 won its first big race at Oran Park a couple of weeks before the biggie, in the hands of Doug Chivas. It was not to be at Mount Panorama as the car – and Chrysler's works team – was still too new.

Nonetheless, Leo Geoghegan quickly became the hero of the Aussie Mopar movement with competitive sprint race showings that pointed to good times ahead with the E38's successor.

Just by being Chrysler's Bathurst challenger in the 1971 Hardie-Ferodo 500 – the last before the Supercar Scare ended the arms race – has made the E38 revered over the ensuing 34 years.

Designers experimented with a fastback design featuring a hatchback rear. This would have been the first Aussie-built hatch. 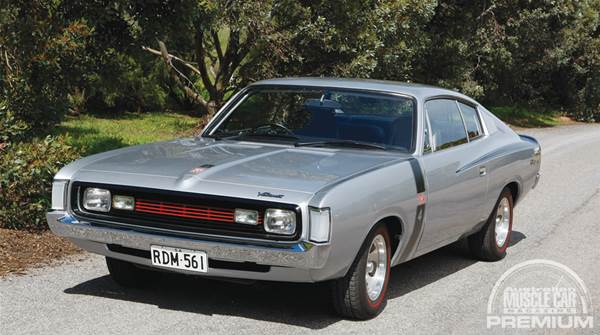 The E49 was the last truly great Chrysler in Australia.

The R/T E49 was the quickest and most powerful Australian muscle car produced prior to the infamous June 30, 1972 turning point – the Supercar Scare.

With a claimed 302bhp from only 265ci, the performance yardstick of muscle cars – acceleration and the quarter mile – were the Charger's domain. Not only was the E49 the quickest to get to 100mph but it was also the only Aussie muscle car to achieve this feat before the car passed the measured quarter mile.

And let's not forget the way-cool advertising campaigns, “Believe” and “Hey Charger!”.

The E49 – and its predecessor, the E38, for that matter – are in an exclusive class – two door coupe body style; engines producing over one horsepower per cubic inch capacity (with the help of triple Weber carburettors); manual transmissions only; bewildering array of factory optional equipment for top-level motorsport competition. Others had the ingredients, but only one had it all.

The E49 was a logical evolution of the E38 and improved upon it in two important aspects: more power and the use of a 4-speed Borg Warner-manufactured manual gearbox. Its handling was also acclaimed.

The E49 was the last of the breed – the pentastar brand's final Bathurst special. Today, E49s are super rare. Only 149 were built, with about 100 still in use today. Just 21 of the 149 produced came with the famed A84 option 35-gallon fuel tank, double the standard tank's capacity. 'Big Tank' E49s are considered Australia's second most collectable car, with its archrival, the Falcon GT-HO Phase III at number one.

Doug Chivas epic drive in the 1972 Hardie-Ferodo 500 saw him cover the 130 laps on just two tanks of fuel. He was, of course, driving one of the 'Big Tank' versions and finished third, the best finish for a Charger in the Great Race.