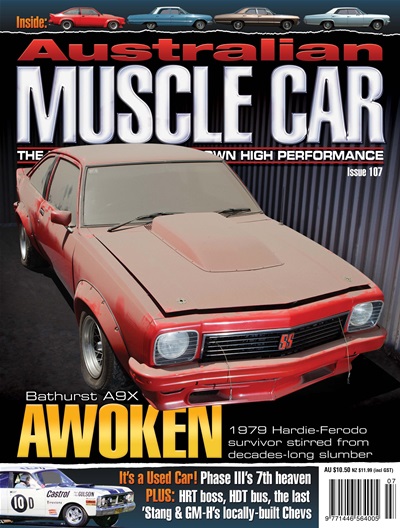 Muscle News
The crusade for the Holy Grail and Ford’s new Shelby GT500.

Muscle Maniac
The VJ Valiant cartoon hero, the ‘Team Brock’ Commodore VE SS and how Ron Dickson’s second Camaro made it down under from Arizona via Laguna Beach, California.

Cover story: Awakenings
Forty years after A9X Toranas crushed the field at Bathurst in 1979, one of those cars has justresurfaced – after 37 years in obscurity, 15 years of those gathering dust in a storage shed.

My Muscle Car
AMC readers show us their pride and joy, including the Zombie Hunter.

The last Mustang
As Ford prepares for the debut of the Supercars version of the Mustang, we look back at the last ponycar to race in ATCC, Laurie Nelson’s Group A Mustang.

Chev in Australia
The history of Chevrolet in Australia is far more extensive than many people think.

Perfectuned
Extract from a new autobiography from performance engine tuning legend and the man behind Perfectune and the Yella Terra brand, Dave ‘Dyno’ Bennett.