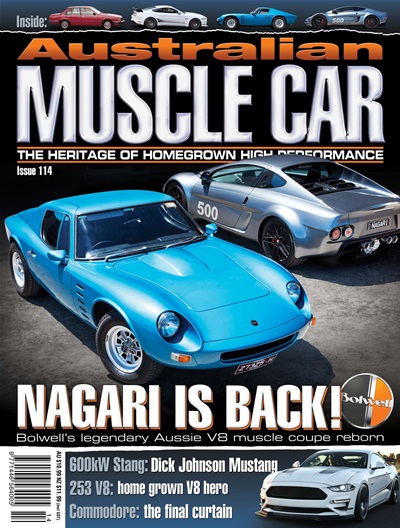 Bolwell is back with a new-age Nagari, half a century after the original Ford 302-powered Melbourne-built Aussie muscle coupe stunned punters at the ‘69 Melbourne Motor Show

It’s official, the Holden Commodore is no more. AMC refl ects on the unusual origins of this Aussie icon and laments what turned out to be a sad and agonisingly slow death

Its a car with a wordy name, but then the Dick Johnson Limited Edition by Herrod Performance is also probably the last word in Ford Mustang high performance

He wasn’t a star name but David Seldon was a solid and respected Bathurst performer - even if he probably wasn’t on Allan Moffat’s Christmas card list...

This ‘59 model ‘tank’ Fairlane is one fairly unique Ford, and not just because it’s owned a cherished by a self-confessed Holden man, retired Supercars racer Steve Reed