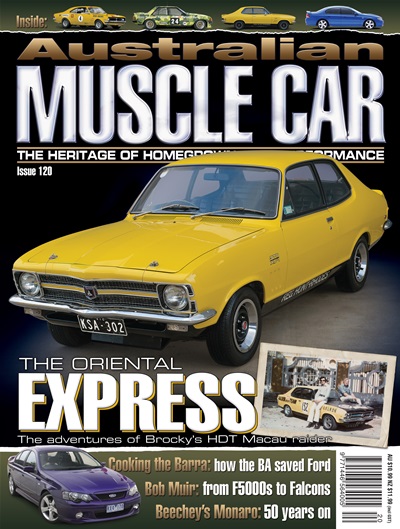 Adventures in an ‘El Camino’, John French’s 90th and that Mount Panorama sign

The tale of one of the original HDT Torana XU-1s, and its oriental affair in Macau

To celebrate the 50th birthday of the original XU-1 model, we present 50 reasons to love the
cheeky little hot Holden coupe

...you’re hot. When Holden got cold feet over its V8 Monaro, the alternative was to try
something hot with the dynamic new Torana GTR

Looking back half a century to the fi rst Holden victory in the Australian Touring Car Championship, courtesy of ‘Stormin’ Norm’ Beechey and his famous Monaro GTS 350

Birth of the BA

The story of the development of the BA model Falcon, the car which turned Ford’s fortunes
around after the disaster of the unloved AU series

In an extract from the new Glenn Seton book, Glenn talks about the turmoil within the team in 1995, and the heartbreak of suffering engine failure when victory looked in sight