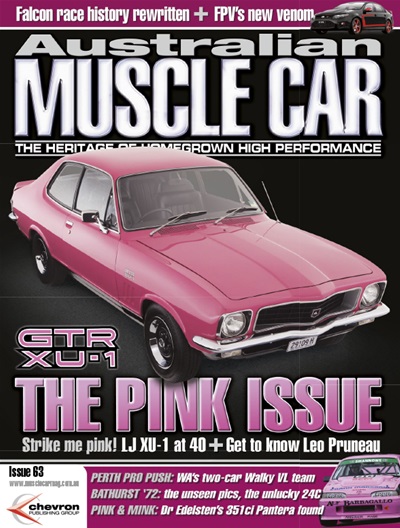 XU-1 at 40
We pay homage to the ultimate version of Holden’s giant-killing six, and celebrate the end of a golden era of production cars.

Leo Pruneau
How a kid from the USA’s Midwest, who couldn’t draw, became Holden’s chief stylist.

Bondy’s 24C
It’s survived three seasons of tin-top racing, a roll at Bathurst and a dozen owners. Like the drivers who raced it, this 1972 LJ GTR XU-1 is immortal.

You Yangs
James Cockington switches the spotlight on to Ford’s big blue testing oval – a circuit some found more challenging than Mt Panorama.

Bill Pitt
Paul Gover introduces us – and Jamie Whincup – to a living motorsport treasure, who was on the podium of the first three ATCCs. He also won Australia’s first 24-hour race.

NZ Winter Series
Steve Holmes takes us back to 1975, when the NZ Endurance races brought production cars out of hibernation and on to the front page.

Hawk GT
Is this the muscle car that could have saved Studebaker? Aaron Lofts profiles the rare bird with uniquely Aussie connections.

Falcon’s first race
AMC uncovers rare evidence of the XK’s first race – on a little-known Qld circuit – months before its ‘official’ debut at the inaugural Armstrong 500.

Out of Action
Unrestored, but safely preserved: the Bushman’s XY GT. Plus a myriad of mouldering muscle from Australia’s paddocks, creeks and forests.