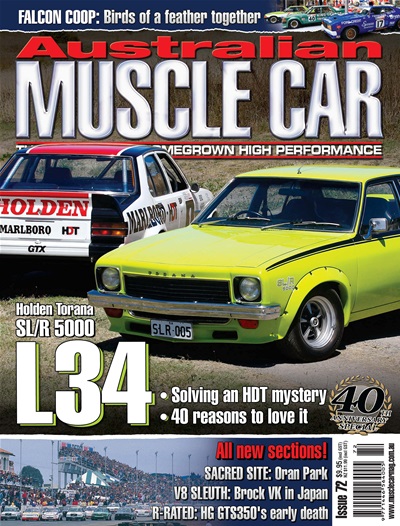 Muscle News
Paul Gover reports on the latest from Port Melbourne and Broadmeadows. The 35-year veteran comments on the impending death of Aussie-built Holdens. Suggested song to play in your head while reading this section: ‘Say Goodbye’ by Hunters & Collectors.

Muscle Mail
AMC readers recall RAAF base racing in the 1980s, punting prized Pacers, holidaying on the Hume Highway and get excited about excellent XJSs and XJ-Ss. Note the hyphen. Theme song: Anything by Cat Stevens.

Solving an L34 Riddle
Pinpointing the racing history of an ex-Holden Dealer Team Torana SL/R 5000 L34 is no easy task, but we’re helping one owner find out his car’s racing identity. Theme song: ‘Looking for Clues’ by Robert Palmer.

Sacred Sites
From this issue we look back at the racetracks which hosted some of the greatest muscle car stoushes – and check out what remains. We start with the most recently departed, Oran Park. Theme song: ‘Don’t Tear It Down’ by Spy vs Spy.

Poster
AMC now features a regular double-sided poster. This time we salute Kevin Bartlett’s Channel Nine Camaro and one of the race it won, Oran Oran Park’s 1982 ATCC round. Theme song: ‘Camaro’ by Kings of Leon.

Harris Collection
Check out the Harris collection, now known as Garage 88, to learn more about the history of its predominantly Group C and V8 Supercar-era Fords. By Aaron Noonan. Theme song: ‘Do You See What I See?’ by Hunters & Collectors.

R-Rated
Introducing a new section for mature, open-minded readers only. Contains strong thought-provoking content and debunks myths. No nudity. Written this edition by Ben Stewart, who delves into why Holden killed off the HG Monaro GTS 350 early. Theme song: Anything off Rihanna’s ‘Rated R’ album.

V8 Sleuth
Another new section, this time by Channel Seven commentator and chassis historian Aaron Noonan. He kicks things off with the story of the Brock VK Commodore that still lives in Japan. Theme song: ‘Turning Japanese’ by the Vapors

The Pacer in Racing
The Pacer can’t claim a long list of outright race victories, but two years of Series Production racing showed how good a hot six cylinder-powered Aussie four-door sedan could be. We recall some of the key memories. Theme song: Yul Brynner’s ‘Russian Gypsy Song (The Pacer)’.

Muscle Man
Legal eagle Jim Keogh will tell you that motor racing needs solicitors. Yet, in the long-time Bathurst privateer’s case, the opposite was true. He’s profiled by Paul Newby. Theme song: The Cruel Sea’s ‘Better Get A Lawyer’... better get a real good one.

MIA FOUND
We’ve tracked down what’s left of the trio of 3-series Sports Sedans/GT cars raced by the iconic JPS Team BMW in the 1980s. Theme song: The Velvelette’s ‘Needle In A Haystack’.