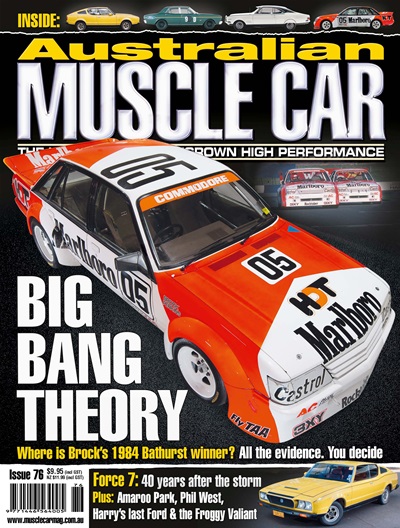 Muscle News
First pics of the last ever Aussie-built Ford Falcon, the FG X. Why didn’t they just call it the FK, as a nod to the first model, the XK? Paul Gover reveals the latest. Suggested song to play in your head while reading this section: ‘Say Goodbye’ by Hunters and Collectors.

Muscle Maniac
This is the first time we’ve featured a muscle car owned by a professional circus performer who is able to lift a washing machine with her hair! The car in question is a VJ Valiant Charger. We also check out the work of artist Paul White. Theme song: anything from Cold Chisel’s ‘Circus Animals’ album.

Right Said Fred
Fred Gibson, in his exclusive AMC column, recalls the switch to the XA Falcon under the new touring car rules for 1973. Theme song: anything from Right Said Fred.

Big Bang Theory
To mark the 30th anniversary of the 1984 James Hardie 1000, AMC presents the only story on the topic that AMC readers want: where is the winning car? Theme song: ‘True Colours’ by Cyndi Lauper.

Harry’s last Falcon
Genuine works GTs with a Bathurst 500 history aren’t exactly thick on the ground. Which makes this ’68 XT Falcon one very rare bird – a phoenix risen from the ashes. Theme song: Old Blue Eyes’ ‘Come fly with me’.

Muscle Man
Not Des West (or Luke West!), but Phil West – an accomplished Aussie wheelman who seemingly gave it away too soon. Or did he? You don’t win races at Bathurst in an F1 car without talent. Theme song: ‘You don’t know me’ by Willy Nelson (or Cindy Walker or Ray Charles).

Leyland Force 7
The Leyland Force 7 from 1974 was a thundering storm that blew out to sea. AMC examines how it was born and why it died. We take one of the 10 surviving Force 7s back to the historic site where it was built. Theme song: ‘Stormy Weather’ by Etta James.

R-Rated
AMC’s new section for mature, open-minded readers only. This edition we reveal the stillborn Valiant replacement that the Frogs tried to flog to Chrysler Australia. Theme song: ‘French Kissing in the USA’ by Blondie.

V8 Sleuth
Channel Seven commentator and chassis historian Aaron Noonan reports on a rare pair of red Ford Sierra RS500s that are being readied for the track again. No, these Sierras didn’t originate in Queensland. Theme song: ‘Get back’ by The Beatles.

Accessory after the fact
Spats, spot-lamps, suitcases and sunvisor for a muscle car? You’d better believe it! AMC delves into what could be an emerging trend. Get set to play I-Spy with a Monaro GTS 350. Theme song: ‘A dedicated follower of fashion’ by The Kinks.

Drag shootout
Could this have been the last ever Muscle Car Showdown day? AMC’s snapper went out to Sydney Dragway to record the action. Theme song: ‘O Yeah’ by End of Fashion.

Sacred Sites
Amaroo Park was built in 1967 and buried in 1998. We return to the site today and revisit the action from the bushy circuit’s heyday. Theme song: ‘Amaroo Sunrise’ by Nigel Holton.

Punter Pics
AMC puts you in the picture with a double-shot of readers’ images. Theme song: ‘Kodachrome’ by Paul Simon.

Out of Action
The segment we loathe but you love... no, sorry, that’s Red Faces from ‘Hey, Hey It’s Saturday’. Theme song: ‘It’s all over now’ by The Strolling Bones.

Whaddayaknow?
The Missing in Action name has gone MIA. Theme song: A certain U2 song.