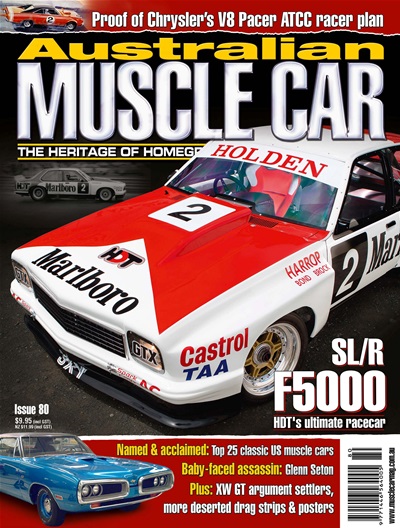 Muscle News
Pricing announced for the long-awaited, Australia-bound Mustang; Ford and Holden make plans for their roles as importers; farewell Leo Geoghegan and a wrap of retro racing's season-openers. Beverage to consume while reading this section: Victoria Bitter (gettit?).

Muscle Maniac
The Ilinga resurfaces; Mrs Thomson's Mustang, one of the first imported into Australia; the Valiant InfoBase & the original maniac signs off after 60-odd issues. Beverage: whatever your poison, let's toast James Cockington.

Muscle Mail
Readers discuss whether the Bib Stillwell Specials were really that special; present their own sacred sites; and show us their Fords. Beverage: anything on tap at the Post Office Hotel.

Columns
Racing legend Fred Gibson recalls a classic commercial, while new AMC columnist Paul Gover outlines his awkward teen years growing up as a carmad youngster in Campbelltown. Beverage: a good red as, like, Fred, it gets better with age.

HDT's ultimate racecar
This is one special Holden Dealer Team Torana – a factory Holden racing machine with a F5000 engine. It was the fastest car run by the iconic operation, during a boom time of wild Sports Sedan competition. Beverage: any potent cocktail.

Posters
One side features a Ford XW Falcon GT, the other a Holden LC Torana GTR XU-1. Beverage: Punch (heavily-laced).

Muscle Man
It's hard to believe that Glenn Seton is 50 this year. In fact, he reaches the milestone while this edition sits on newsstands. It's an appropriate time to reflect on his ultra-successful career and its many dramatic moments. Beverage: White tea. Read the story and you'll understand.

Mustang Jenny
Glenn Seton heads down Thunder Road in the 2015 Touring Car Masters for a full-time campaign in a classic Ford Mustang in Hertz colours. It's a car that wants for nothing and will give the TCM series heavyweights plenty to think about. Beverage: Thunder Road Golden beer. Truly.

Chrysler's 340 V8s
Debate has raged for decades whether Chrysler Australia intended to race a 340-engined Charger. But what if we told you it wasn't the Charger that Tonsley Park originally considered for a V8-based racing program? Plus, we check out a 340ci R/T-style Charger built by a former Chrysler engineer. Beverage: West End Draught from a ring-pull steel can.

V8 Sleuth
Aaron Noonan hunts for one of Peter Brock's Commodores. Could it be that this car is still on the road today, its owner unaware that it rocked around the clock at Bathurst? Beverage: a cup of herbal tea in a polystyrene cup.

R-Rated
We crunch the numbers (and colours) surrounding the XW GT and GT-HO launched in 1969. Beverage: GT Lager.

Classic US muscle
An introductory guide to the top 25 most desirable – in our opinion, at least – classic American muscle cars. Check out the cars the Yanks dig, from the 1964 to 1974 period. Beverage: you'll need a six-pack from one of the big three – Millers Genuine Draft, Coors or Budweiser.

Cars That Won Bathurst
This edition we revisit three former cover cars as part of our continuing series pinpointing the whereabouts of the Great Race-winning chassis. Gricey's own brew: Black Diamond Premium Lager.

Sacred Sites
AMC has reached the halftime break in our review of defunct race circuits of the muscle car era. During this intermission we switch our attention to the drag strips that have passed into history. Part two. Beverage: any top alcohol.

Out of Action
The segment we loathe but you love... no, wait, that's Red Faces from ‘Hey, Hey It's Saturday'. Beverage: Bluetongue.

Whaddayaknow?
We've nailed down exactly which car graced the Bathurst 1000 grid more than any other. Beverage: Tooheys, of course.