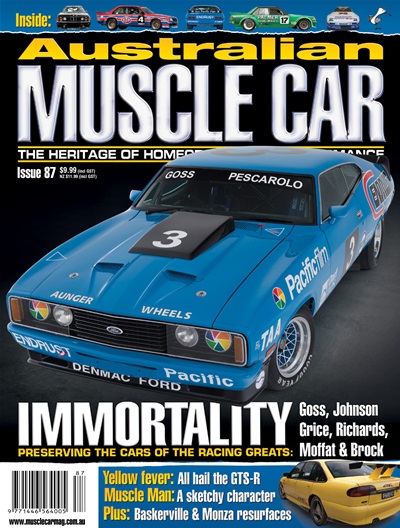 Muscle News
The latest news on the 2016 Australian Muscle Car Masters. Meanwhile PaulGover, AMC’s newsman, digs up the latest on the last hurrahs of the AussiebuiltFalcons and Commodores.

Muscle Maniac
Allan Moffat has fond memories of the sweet-handling Cologne Capri. Butone of the ugliest incidents of his long career came while driving the Germanbuiltbeast. Meantime, a DeKon Monza has popped up in Australia.

Muscle Mail
Another White Hot Special has emerged – and it’s a little ripper. Readersalso recall the Sandown 6-Hour classics of 1964 and 1965, Moffat’s Monzaand Capri and provide a reality check.

Columns
Racing legend Fred Gibson walks us through the long list of road cars he’sowned over the years. We are amazed he can jam them all into one column.While Paul Gover recalls Holden’s GTR-X.

Immortality 1: Goss
This XC Falcon hardtop never set racetracks on fire between 1977 and 1979but it is set to become one of the Australia’s most loved Historic racecars. It’sjust been restored and prepped to be ultra-reliable in its second racing life.

Immortality 2: Moffat
It’s the car that stirred the Australian touring car pot in the 1980s. Fittingly,the last Mazda RX7 raced by Moffat’s team is the most original of thesurviving rotary racers today.

Immortality 3: Grice
Elvis lives! Despite a life of excess – including three crashes in its first threerace meetings – this ex-Grice Commodore has an unbroken line of historyand a long line of broken panels.

Immortality 4: Johnson
If there’s a Group C-era touring car in a condition more original than DickJohnson’s famous Greens-Tuf XE Falcon – the second one – we want toknow about it.

Posters
For Ford fiends, we present Gossy in all his glory. Sorry, make that one ofGossy’s cars. On the flipside, there’s a White Knight Charger.

Immortality 5: Brock
From nearly winning Bathurst on debut to sitting on the side of a Melbournestreet, Peter Brock’s first touring car championship-winning XU-1 Torana hasquite the story behind it.

Immortality 6: Richards
Who better to restore an historic racecar than the bloke who originally built it.Who better to race it today than the car’s original star driver, one Jim Richards.This 635CSi started its racing life as a Group C machine, before it became aGroup A machine. Now it’s back in Group C guise.

Sacred Sites
Baskerville is certainly no basket-case. In fact, big things are happening at thelittle Hobart track that hosted the top names of the 1970s. We reckon it shouldbe the blueprint for racetracks built today. Wait til you see the photos kindlysupplied by Bruce Smart (of kingstoncamera.com.au)

Whaddayaknow?
Continuing our Sunday Too Far Away theme, we discover why the Ross Bond drivenTorana A9X sedan failed to qualify for the 1977 Hardie-Ferodo 1000. 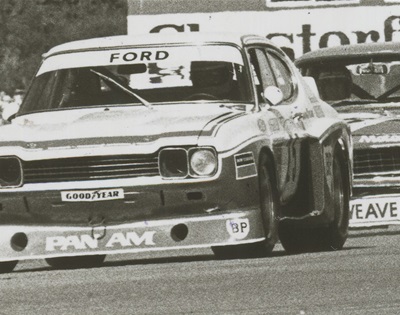