News
Goodbye. Farewell. Amen. It’s been a long build up to Holden’smanufacturing closure – and our reportage is well overdue thanks to ourproduction schedule – but here’s our coverage of the week leading up toOctober 20. This issue’s news pages aim to provide readers with an historicalrecord of the sad occasion. And an insight into the Mosman Park, WA, plant.

Muscle Maniac
Brocktober 2017, at Bathurst, was effectively the nationals for the BrockCommodore Owners Association of Australia. The guest of honour was1987 Bathurst winner Peter McLeod. Plus a Pagewood-built HoldenMonaro GTS 327 gets the My Muscle Car treatment.

Aussie Muscle Car Run
The 2017 instalment of the Leukaemia Foundation fundraiser headed toNSW for the first time. AMC tagged along.

Muscle Mail
Readers drop us a line with their memories of quick Dick’s Greens-Tuf Ford Mustang, Holden’s Pagewood faclity and pitcrewing for GarryWillmington. Garry’s red Supra lives on, too.

Coulda... Cortina
Ford Australia’s product planners gave consideration to a TC Cortina V8.While it didn’t follow through on bringing this car to life, one enthusiast has.

Coulda... Monza
Brock was never short of an idea. One of his best was a V8-powered Monzathat Holden or HDT SV should have produced. His prototype lives on.

Coulda... Centura
Chrysler should have taken a leaf out of Holden’s book by marketing four, sixand V8 versions of its mid-size, mid seventies offering. But in Mahogany?

Coulda... V8 XU-1
The surviving pink LJ GTR Torana V8 prototype is again powered by a 308ciengine – for the first time since the mid 1970s.

Coulda... Charger
No one was more disappointed with Chrysler Australia’s decision not to selland race a V8 R/T Charger than one of its own engineers, Bob Burke. So hebuilt his own one-off version.

Coulda... EA GT
Ford’s first V8 Falcon for a decade was a 1990 American-built prototype thatnever made production, but it paved the way for many more that followed.

Muscle Man
Has there been a more intriguing Bathurst winner than John Goss? In thiscareer overview AMC’s editor, with input from the man himself, ponderswhat makes him tick.

Group A Alfas
The GTV6 we’ve dubbed Il frigo giallo – the yellow fridge – lives on todayas a reminder of the Alfa Romeo marque’s mid-1980s return to local tin-topcompetition with two of the greatest Aussie drivers behind the wheel.

Sacred Sites
Bathurst’s little brother, Sandown, has a long and distinguished history, but ison borrowed time. We track its history.

Out of Action
Overcooked, overlooked and overchooked!

Whaddayaknow?
Here’s an XD Falcon that wasn’t as quick as Dick’s Tru-Blu or Morris’s limegreen version featured this edition. But we wanna know where it is today. 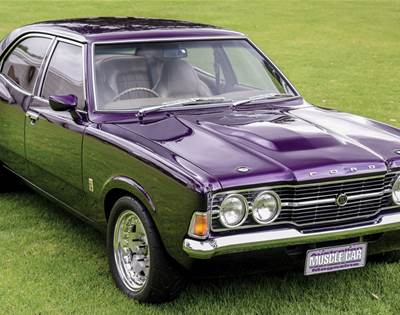 What could have been: V8-powered Ford Cortina