One of Peter Brock’s most famous cars is up for grabs. The Holden Torana GTR XU-1 that the touring car legend raced in the 1973 Hardie-Ferodo 1000 and to the 1974 Australian Touring Car Championship.

The LJ Torana is one of more than a dozen Holden and Ford muscle cars that will go under the hammer at the 2022 Shannons Winter Auction, which will run online between August 2-9.

Brock drove the car to wins at Symmons Plains, Calder Park and Amaroo Park in 1974 before switching to the new, V8-powered Torana SL/R 5000 for the final two rounds of that season, clinching the title at the penultimate event at Surfers Paradise.

While Brock won the ‘74 touring car title in this Holden Dealer Team entry, its most memorable moment came at Bathurst in ‘73. It was during that race - which was the first Bathurst classic run to 1000km instead of 500-miles - that Brock’s co-driver, Doug Chivas, ran out of fuel and was forced to push the car into the pits.

The car has spent the last 16 years with the current owner and has reportedly been restored by the Tate family. 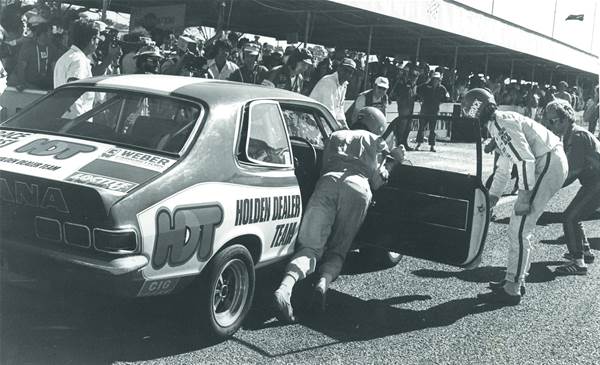 Shannons has placed an estimated sale price between $900,000 and $1.2m, although given the current popularity of classic Holdens and the historical significance of this particular example, the price could exceed those figures.

If you’re a blue oval fan there’s a ‘69 XW Falcon GT and a ‘71 XY Falcon GT on the block, or if you prefer something more modern there’s also a 2007 FPV F6 Typhoon amongst the lots.

Alternatively, if you want something forigen there’s a 1970 Plymouth Cuda 440 Coupe, a ‘66 Chevrolet Corvette 427ci Convertible and an ‘85 DeTomaso Pantera you can bid on.