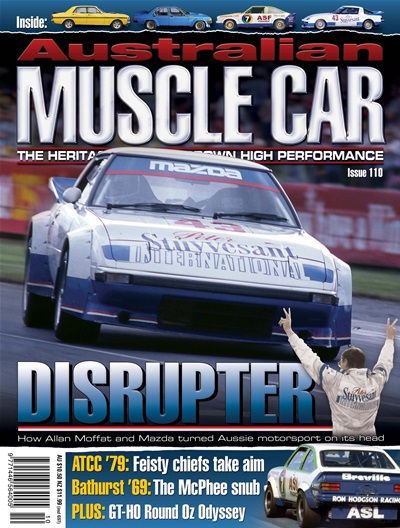 Muscle Maniac
Previewing the Repco Round Oz Retrial. Entrant Phil Walmsley talks us through preparations forthe big event, where he will circumnavigate the continent in a genuine VC ‘Brock’ Commodore.

Cover story: Moffat’s Mazda era
Allan Moffat was Ford’s racing hero. But all that changed in the early 1980s. Having beenabandoned by Ford, he abandoned them. Worse than that, he sided with Japanese carmakerMazda to race an RX7. AMC unravels a remarkable story of a turbulent time.

Two of a kind
The two Toranas Bob Morris used to win the 1979 ATCC live on today. Not only is this pairof legendary A9X Group C race machines still with us, but they reside once more under thesame roof, with both cars now owned by historic racer Andrew Cannon.

Muscle Man: David Brabham
He carries the biggest Aussie name in world motorsport, but Geoff Brabham wasn’t contentto be just a famous son. He carved out a remarkable international career over two decades– in Can-Am, Indycars, IMSA and Le Mans – and then returned home to score more wins.

Round Oz Odyssey
Early this year a small group of Ford enthusiasts took on the challenge of circumnavigatingthis wide brown land in a pair of XY GT-HO Phase IIIs.

The snub
It’s 50 years since GM-H turned its back on reigning Bathurst winner Bruce McPhee aheadof the 1969 race. It’s a baffling snub that very nearly came back to haunt Holden, withMcPhee’s ’69 Falcon proving to be an enduring machine in more ways than one.