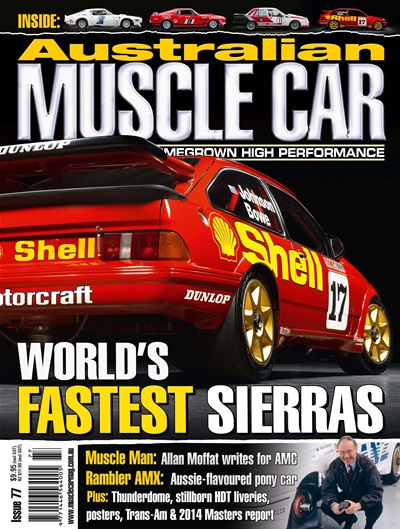 The last Falcon GT rolls off the line; the FG X makes its public debut; and the 2015 Mustang impresses hard-nosed Aussie journalists. Suggested song to play in your head while reading this section: ‘Say Goodbye’ by Hunters and Collectors.

Australia’s most famous Torana; the Monaros that went into service for Uncle Sam; and a full set of Holden Premiers up for sale. Theme song: ‘Danger Zone’ by Kenny Loggins.

In his exclusive AMC column, the Ford legend gives us the good oil on the works Falcon two-doors in 1973. We also welcome back a guest columnist. Theme song: Anything by Right Said Fred.

For six years Dick Johnson raced Group A Sierra Cosworths. How did DJR make them the fastest in the world? We document the development of Dick’s red rockets from hand grenades to intercontinental missiles. Theme song: ‘Little Red Rocket’ by Hall.

Why did Australian Motor Industries go to the trouble of assembling just 24 Rambler AMXs in Melbourne? The answer lies in the marvellous world of marketing. Theme song: ‘The Rambler Song’ by Shellac.

DJR’s red rockets are depicted on one side of AMC’s regular poster. The other side displays the HG Monaro GTS 350 that featured in issue #51. Theme song: ‘Poster Girl’ by Beccy Cole.

Who better to tell the story of Allan Moffat’s racing career than the man himself. In the first of a three-part profile, Moffat opens up about key Ford campaigns. Theme song: ‘If Life is so Short’ by Canadian pop band The Moffatts.

While Garry Rogers was the star attraction at the Masters’ Legends Dinner, on track his old Torana A9X grabbed the attention of Channel Seven’s Aaron Noonan. Theme song: anything off Noonz’s long-awaited first album.

Former GM-H stylist Paul Beranger shares some never before published HDT paint schemes that didn't make it onto the grid. And recalls the ones that did. Theme song: ‘Man of Colours’ by Icehouse.

Back in the Day

It’s 40 years since the Leyland P76’s finest moment during the 1974 World Cup Rally, so we’ve dug up some amazing pics of the Aussie-built machine in some faraway places. Theme song: Eskimo Joe’s ‘Foreign Land’.

Was there really a purpose-built NASCAR-style paved oval with 24 degree banking built on Melbourne's outskirts in the 1980s? Or did we just dream it? Field of Dreams soundtrack.

The segment we loathe but you love… no, wait, that’s Red Faces from ‘Hey, Hey It’s Saturday’. Theme song: ‘It’s all over now’ by The Strolling Bones.