Muscle News
We drive the most muscular version of the last ever Falcon model, the FG X XR8. But is it a worthy send-off for an Australian motoring icon? Suggested song to play in your head while reading this section: ‘Say Goodbye’ by Hunters and Collectors.

Muscle Maniac
VL ‘Walky’ #001, originally given away as first prize in a 1988 magazine competition, pops up. And who knew Australasian Post would prove prophetic in predicting a rapid rise in the value of Aussie muscle 25 years ago. Theme song: Dirty Dancing soundtrack’s ‘(I’ve Had) The Time Of My Life’ – No.1 in 1988.

John Goss Special
When the slow-selling Falcon two-door hardtop needed a sales boost, Ford borrowed the name and image of the reigning Bathurst champion. Theme song: ‘Fox on the Run’ by Sweet, No.1 single in 1975.

Holden LE coupe
The LE known as the LE. The two-door Monaro’s last hurrah – for a quarter of a century, anyway – caused quite a stir within GM-H. Theme song: ‘Fernando’ by ABBA, No.1 single in 1976.

Posters
One side features the 1987 Bathurst 1000-winning VL Commodore of one P. Brock. The other side shows the GT-HO Phase IV earmarked for Allan Moffat but never raced. Theme song: ‘Poster Girl’ by Beccy Cole.

Muscle Man Moffat
Who better to tell the story of Allan Moffat’s racing career than the man himself. In part two, the racing legend recalls some of his successes outside the Blue Oval fold – and outside Australia. Like how he managed to upset a BMW chief despite winning the 12 Hours of Sebring. Theme song: ‘If Life is so Short’ by Canadian pop band The Moffatts.

1969 Falcon GT-HO
This issue we present not one, but two John Goss-flavoured features for the 1974 Bathurst winner’s legions of fans. Here’s a story of a XW GT-HO delivered to McLeod Ford in 1969 that lives on. Theme song: ‘Something’ by The Beatles, No.1 single in 1969.

R-Rated
AMC’s new section for mature, open-minded readers only. This edition we consider why GM got itself tied up in knots via its ‘no racing’ policy. Theme song: XTC’s ‘Senses Working Overtime’.

Cars that won Bathurst
We tell the life story of the 1978 Bathurst-winning Torana A9X, which has lived in the shadow of its older brother, the ‘79 race winner. But shouldn’t. Theme song: ‘You’re The One That I Want’ by Olivia Neutron-Bomb.

Out of Action
The segment we loathe but you love… no, wait, that’s Red Faces from ‘Hey, Hey It’s Saturday’. Theme song: ‘It’s all over now’ by The Strolling Bones. 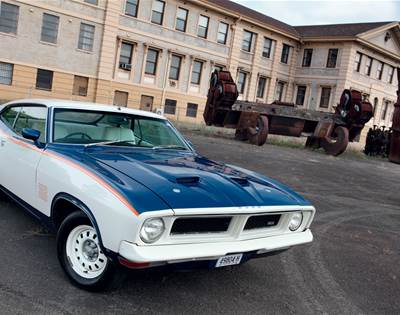