When the slow-selling Falcon two-door hardtop needed a sales boost in 1975, Ford borrowed the name and image of the reigning Bathurst champion. 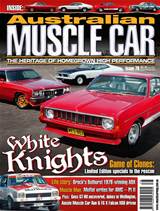 The Falcon hardtop’s early success on the racetrack was not reflected on the sales charts. Back-to-back Bathurst wins (1973 and 1974) failed to ignite a rush to Ford dealers. Ford struggled to sell more than 500 GT hardtops each year following the model’s introduction, with the XA, in 1972. By 1975, when the more masculine-looking XB was well into its lifespan, this number fell to a measly 123. And the picture didn’t get a whole lot prettier when Fairmont and Falcon 500 hardtop sales were added to the flagship GT’s figures.

Take out Ford internal company cars, plus those driven by dealer principals, and sales of the coupe were near crisis levels.

As the late great Ford Australia chief Geoff Polites – in 1975 Ford’s Marketing Plans and Research Manager – once told AMC of the GT’s last years, “we were selling cars to ourselves.”