Muscle News
Falcon takes a farewell bow with a 2016 turbo and is Camaro coming?Beverage to consume while reading this section: Turbo King Dark Ale.

Muscle Maniac
Falcon restorer, Cameron Manewell, is still pinching himself that he ended upsupplying a pair of coupes for Mad Max: Fury Road as the bare-metal 'RazorCola'. Beverage: The spirit of your choice - mixed with you-know-what.

Star Car: Brabham HB
The Brabham Torana was more show pony than pony car, but it got the ballrolling on a decade of sporty Toranas. Beverage: A pint of Black and Tan.

Star Car: Brock Falcon
The Brock B8 was a well-executed, mildly-enhanced EA Falcon thatdemonstrated, after the Lada debacle, that he was back in business as aspecial vehicle manufacturer. Beverage: A nice herbal tea - not too hot, butjust the right blend of refined, flavoursome leaves.

Star Car: WGR VS
When Wayne Gardner swapped two wheels for four, he could hardly haveimagined his touring car team would soon be producing hot Holdens for theroad bearing his signature. Beverage: This Swan's made for you.

Muscle Man
Tony Longhurst has been a central figure in some of motor racing's mostfamous - and infamous - moments. He reflects on his major achievements.Beverage: XXXX Gold (Coast, that is).

Cars that won Bathurst
No model can top the XA Falcon's win-rate of two Great Race victories inthe model's only two appearances. Sadly, neither of the two winning chassissurvived the ravages of time. Beverage: Tooth's - where is it now?

Kiwi L34 Torana
The Torana L34, in which Jim Richards made his stunning Bathurst debut in1974, lives on today in NZ. Beverage: Kiwi lager - like the race, cold and wet.

V8 Sleuth & R-Rated
Our behind-the-scenes correspondents shine the spotlight on some lesserknowncars and drivers, and reveal the Charger designs that got nobbled.Beverage: A boutique beer with acrum chaser.

Top 25
Inspired by our Brock Falcon B8 feature, AMC presents 25 of Perfect Pete'snon-Holden treats - both racecars and signature edition roadies. Beverage:Clayton's - the drink you have when you're not having a drink.

Sacred Sites
In a curious way, Caversham owes much of its success as a circuit to motorracing's most tragic crash. Beverage: A nice dry red from the Swan Valley.

Out of Action
Beverage: A Rusty Nail cocktail. 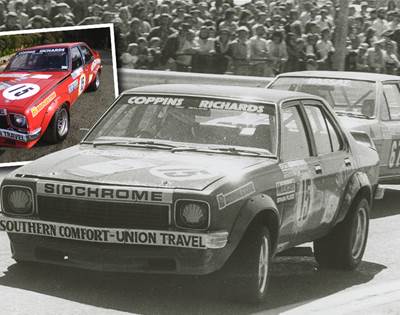