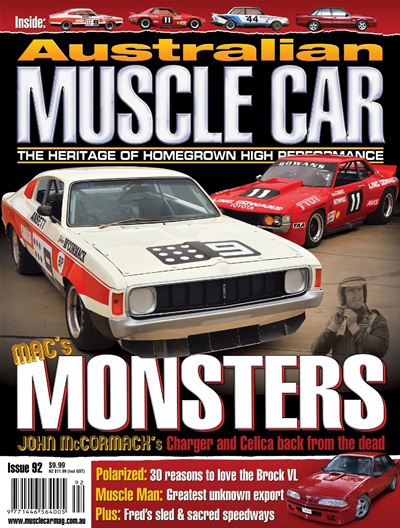 Muscle News
Holden’s engine plant closes, auction prices are up, the TCM champ is crowned and our US correspondent discovers a Pontiac GTO that salutes the 2016 Bathurst-winning Commodore.

Muscle Mail
This issue, readers show us pics of their Cooper Ss, defend the HD Holden, take us to task on our inability to identify 1966 vintage currency, and introduce us to Valerie.

Immortal Charger
If there’s one competition muscle car that long-time motorsport fans have yearned to see returned to a racetrack in all its stunning glory, it’s this one –the groundbreaking McCormack Charger. This is the story of the herculean restoration effort.

Immortal Celica
A painstaking, ground-up restoration by its original owner has returned this sweet-sounding Repco V8-powered Sports Sedan – a more compact version of its creator’s famed Charger – to the racetrack.

HDT VL Brock Group A
It’s 30 years since the VL Commodore Group A was launched. To celebrate the milestone AMC presents 30 reasons to love this most, erm, polarizing of homologation models.

Muscle Man
We profile the greatest Australian racing export many motorsport fans have never heard of. You won’t believe what ‘Yogi’ achieved and drove.

AMCM Report
The 12th running of Australia’s number one retro racing festival and muscle carnival had its own unique flavor.

V8 Sleuth
Aaron Noonan updates us on the many things that have come across his desk in motor racing history-land, including the latest early Supercars to be returned to the track.

Privateer gold
Dreaming of finding your very own ex-Bathurst racecar? Perhaps you should look in New Zealand, where the ex-Fred Geissler Group C Commodore was found. Its life story is outlined.

Home Swede Home
Bjorn again! It’s 30 years since a Volvo won the Australian Touring Car Championship. Now, the same Kiwi who brought Volvo to the Australian motorsport scene three decades ago has returned the only Australian-built factory Group A Volvo 240 Turbo Group A racecar to the racetrack.

Punter Pics
The third and final instalment of pics taken by former Lot 6 mechanic at Ford Australia, Geoff Sharpe. Plus some neighbourhood shenanigans from the early 1980s.

Sacred Sites
A change of pace this edition as we recall the major metropolitan speedways that have gone to God.

Out of Action
Overlooked, overcooked and ‘over-chooked’ – barely surviving classics from our motoring past. This issue we hear from a 14-year-old who lives on the other side of the black stump.