Muscle Maniac
AMC is given access to the scrapbooks of Jan Muir, which present further insights into the career and life of her late husband Brian ‘Yogi’ Muir. Plus another HDT replica panel van emerges and a couple of original-shape Monaro GTSs go under the Shannons’ auction hammer in February.

Guest columnist
Our guest columnist this issue, the one and only KB, gives us his thoughts on the prototype FT 5000 open-wheelers.

The ultimate XU-1
Brock’s ’72 Bathurst win immortalised the GTR XU-1, but it’s the 1973 LJs known by Torana enthusiasts as the ‘Bathurst XU-1s’ that are the fastest and most revered road versions of Holden’s hot six. A long overdue subject for us.

Giant killer
Our dedication to telling the complete story of Australian touring car racing continues with the epic tale of a giant killer of an achievement: how the original model BMW M3, with only a 2.3-litre four-cylinder engine, beat its V8s and turbos opponents to claim the 1987 ATCC.

Surfers GT resurfaces
It’s famous for failing at Bathurst in ’68, but the XT Falcon GT model did go on to win the (much longer) Surfers Paradise 12 Hour race in early ’69. Incredibly, the actual winning car from that enduro survives today – and we’ve tracked it down.

Muscle Man
Tyre retailer, circuit promoter, entrepreneur, cancer survivor, tabloid fodder – Bob Jane is or was all those things. Yet to legions of motorsport fans he is first and foremost a race driver of legendary status. Jane recalls his time as Bob the racer. Can he race it? Yes he can!

A taste of TA2
The start-up TA2 Racing Australia category took a racing upstart – AMC’s editor – way beyond his comfort zone when they let him loose out on the track in one of their beaut new LS3-powered beasts. Our stunned mullet relays what it’s like for a complete novice to drive a thoroughbred racecar.

Top 25 Sports Sedans
The best 25 from the wild, weird and wonderful world of Sports Sedans. Let us know which should be No.1 by dropping a line to amceditorial@chevron.com.au and tells any cars that should have been included in our list.

Valiant men
You know the name, but do you know their story? They are Valiant men, the Tilley brothers, and what they don’t know about historic touring car racing (and Valiants in particular) probably isn’t worth knowing.

Mr Holden
Drag racing’s beauty contest to find the fairest (fastest) quarter-mile Holden in the land. We take you back to Castlereagh dragway in the late 1960s and 1970s. Guess what we’re covering next issue?

Punter Pics
AMC reader Mike Terakes provided us with these magnificent pics from the 1969 Rothmans 12 Hour – and he also helped us track down the winning car! That’s it directly above. Ripper ain’t it? We reckon this car could have won the 1968 Hardie-Ferodo 500 at Bathurst had it entered the big race, such was the high-level of preparation for the gruelling a 12 hour battle.

Sacred Sites
Recalling a selection of regional and country speedways that have long since gone to God. If you have photos and details of other rural speedways we’d love to hear from you. Contact amceditorial@chevron.com.au

Whaddayaknow?
Yet another historically significant Sports Sedan’s restoration is complete. It’s the first ‘works’ BMW to race on Australian soil, one of the three Sports Sedan/GT cars campaigned by the legendary JPS Team BMW in the early 1980s and lovingly restored in California. 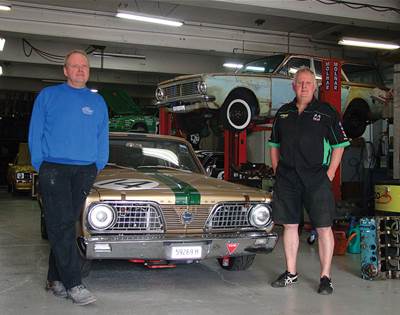