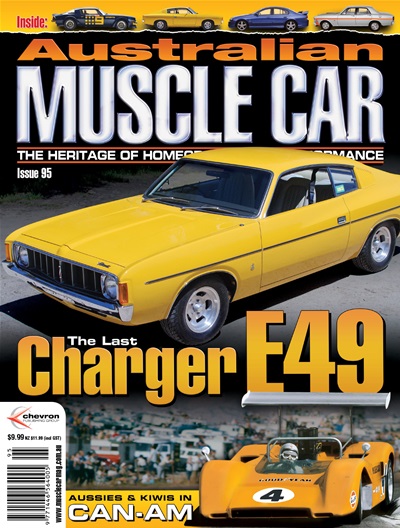 News
With nearly 10,000 Mustangs delivered by Aussie Ford dealers since the ponycar’s local return, we check out the latest on the Stang enhancement market. Then there’s the latest on Holden’s transition from local manufacturer to importer and developer.

Falcon GT Nationals
The biannual Falcon GT Nationals in Perth over Easter saw the Bob Holdendriven, Alto Ford-entered GT-HO Phase II from Bathurst 1970 make its first public appearance back in its country of birth after 40-odd years in New Zealand. Plenty of event colour and trophy winners from page 20.

Muscle Mail
Remember last issue’s Nugget Gold-coloured, ex-McLeod Ford GT-HO Phase III? We’ve since received a little nugget of info in the mail from the second owner of that stunning machine who saw our story and sent us images from its time in Canberra. Plus other reaction to that story and first owner Noel Ward’s tales from the era.

Cam-Am 1: Overview
The biggest of Big Banger racing categories had virtually no limits and culminated in big block Chevs stretched to over nine-litres to counter 1200bhp Porsches. Can-Am’s 1966-74 era is increasingly viewed as the zenith of motorsport innovation and spectacle.

Cam-Am 2: Matich
It’s 50 years since Frank Matich’s high-profile assault on the famed Can-Am series in 1967. We piece together what happened when the Match family and crew hit North America.

Can-Am 3: The Aussies
Australian drivers can’t boast the prolific success – or anywhere near the number of Can-Am starts – of their New Zealand counterparts, but the quartet who did contest events certainly didn’t lack for dramatic experiences or exotic machinery.

Can-Am 4: The Kiwis
New Zealand’s success on the world motorsport stage is unparalleled for a nation of its size. And nowhere did NZ perform more strongly than in Can-Am, thanks to the ‘Bruce and Denny Show’ at McLaren. Chris Amon also flew the flag. We speak to a former V8 Supercars team owner about his time with McLaren.

The Ton
As we head towards our landmark 100th issue, to be published in February 2018, we’re digging up some unpublished pics from our earliest days.

VJ Charger E49
There’s more to this humble-looking VJ Charger than meets the eye. It’s a factory-built beast that was the last Charger to roll off the production line at Tonsley Park with the granddaddy of Aussie six powerplants, the mighty E49.

Muscle Man
Bob Forbes had scores of stories to tell us from his 13 starts as a driver in the Great Race when we sat down to interview him for this profile.

Punter Pics
We’ve themed this issue’s Punter Pics section around speedway, our twopart Sacred Sites special on defunct ovals inspiring readers to send us the images from their files.

Tickford
With the Tickford name back on the local automotive landscape, AMC rewinds to the 1990s when Tickford Vehicle Engineering awoke Ford Australia from its performance car slumber.

Mr Ford vs Mr Holden
With the runaway success of the individual brand ‘Mr Holden’ and ‘Mr Ford’ drag racing events, it was inevitable that the two would go head to head over the quarter mile at Castlereagh.

Out of Action
Overlooked, overcooked and ‘over-chooked’ – barely surviving classics from our motoring past. It’s the segment you love but we loathe, to borrow a line from Hey, Hey It’s Saturday’s Red Faces intro.

Whaddayaknow?
Tracing racecar lineage can be baffling. Take for instance the history of the Matich SR3s raced in the United States. Two are known to have returned to Australia, while the location of the third, which was long thought to have remained in the US of A, had been a mystery. Until now. Excitingly, we can confirm that the Australian-built, V8-powered sportscar in question does indeed live on stateside and we’ve uncovered its chain of ownership.