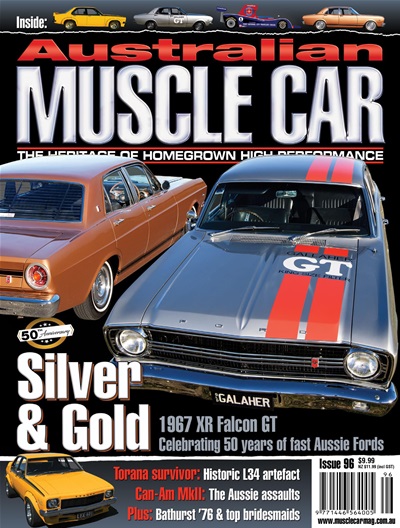 News
With the Australian muscle car soon to be referred to in the past tense only, AMC’s newshound James Whitbourn casts his eyes Stateside to the birthplace of the muscle car and examines what the future holds.

Muscle Maniac
Australian motoring history goes under the hammer at Mallala; the ‘Festival of the Torana’ celebrates the Torana’s 50th birthday; AMC reader Craig buys his dream car from Bathurst and a Cougar is spotted in Queensland.

Guest Columnist
Todd Martin, principal of Muscle Car Events Australia, lets us in on what he’s cooking up for the 2017 Muscle Car Masters... and what cars he’s looking for.

Muscle Mail
Readers fill in some gaps on the ‘Bathurst barbed wire incident’ of 1971 and the ‘Sandown fence incident’ of 1975 featured in issue #96’s Bob Forbes story. There’s also feedback on that issue’s Can-Am and Tickford stories.

XR GT 1: 50 reasons
The XR Falcon GT turns 50 in 2017 – and therefore so does the Australian muscle car. To celebrate a half-century of fast Falcons, we presents 50 reasons to love the first Ford Falcon GT.

XR GT 2: Vaughan/Firth
The men they call ‘Mr Falcon GT’ and ‘H’ tell about the birth of a Ford icon 50 years ago – and the roles they played in its conception.

XR GT 3: Gallaher
The Geoghegan brothers’ XR Falcon GT was the first to greet the chequer at Bathurst in ’67. Within a few hours it was relegated to second place. Today it’s possibly the only surviving factory works Ford from that landmark race.

L34 Artefact
As they say, all good things come to those who wait. Like the Torana SL/R 5000 L34 that Gary Bartlett finally made his own – and which continues to slowly reveal the significant part it played in Holden’s motorsport history.

Muscle Man
Bob Forbes’ time in the touring car privateer ranks as a driver was followed by a long stint as a team owner as the professional era dawned. Part two of our profile also highlights Forbes’ significant role in reshaping the sport.

R-Rated
All the hardcore details about the 1978 Ford Falcon Cobra that you could possibly want to know is in our R-Rated section. No nudity.

Bathurst ’76 myth
Armed with new evidence, David Greenhalgh has another look at the 1976 race – and casts doubt on recurrent claims that the second-placed HDT Torana had actually been a lap ahead of the winning Bob Morris/John Fitzpatrick Torana.

Can-Am MkII: Overview
It’s 40 years since Can-Am was reborn for the 1977 North American racing season. While Can-Am MkII lacked the impact and grandeur of the original no-holds-barred series, it does hold more significance for Australians.

Can-Am MkII: The Aussies
While the original Can-Am in 1966-1974 was dominated by Kiwis and lightly spiced by Australians, the shoe was on the other foot for the series’ second coming from 1977. Alan Jones, Geoff Brabham and Warwick Brown all starred. And a surprising number of other Aussies had a dabble.

Sacred Sites
We look back on the original 3.78km Grand Prix layout of the Adelaide Park Lands circuit and consider the old Formula 1 track’s place in racing history.