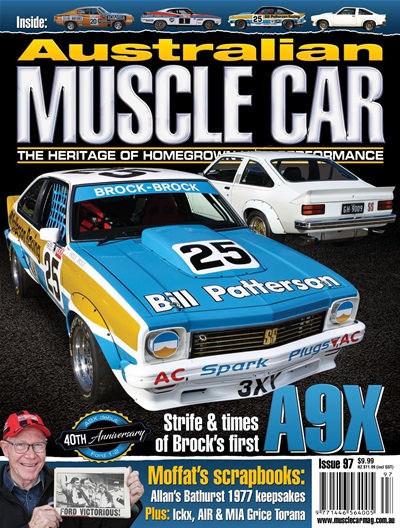 News
Holden has confirmed the ‘VXR’ nomenclature will replace ‘SS’ for the2018 ZB Commodore. We also have the latest on its plans for October20 when the rollershutter comes down for the final time. Plus, we take anew Tickford-enhanced Foed Mustang 360 for a spin.

Muscle Maniac
Last issue we outlined Gallaher’s efforts to ignite sales of its failing ciggybrands through motorsport. Lo and behold, we’ve since received a call froma former Gallaher sales rep who drove a silver XR GT. His recollectionsand insights are fascinating. Plus a wrap-up of the auction action.

Muscle Mail
Readers drop us a line on their memories of the Gallaher Falcon XRGTs and just about everything else that was in the last issue.

A9X 2: Never raced
Today, Greg Hayes’ stunning Palais White Torana sits somewhere betweenthe surviving racing A9Xs and the 405 factory-spec road cars produced.We photographed it on the shores of Canberra’s Lake Burley-Griffin, butperhaps it would have been more appropriate to shoot it outside the nearbyNational Museum of Australia, or, better still The Treasury!

A9X 3: Patto hatch
It’s 40 years since this Torana won on debut at Sandown and, a fewweeks later, sat on the Bathurst pole. After almost 20 years in virtualhibernation, the Peter Brock ‘Patto hatch’ returned to public view andnow, for the first time, AMC details its long overlooked history.

Muscle Man
George Smith is a fabrication genius. He has built about 80 famous racecars,including nine Bathurst winners and three rally champions, for the likes ofColin Bond, Nissan, Peter Brock and HRT. And, in keeping with this issue’soverall theme, George was a member of the winning crew from Bathurst ’77.

Jacky Ickx
Bathurst 1977 winning co-driver Jacky Ickx has only been back toAustralia a couple of times since playing his part in arguably the GreatRace’s most famous victory. So to hear this endurance racing legend’srecollections we had to catch-up with him, fittingly, at Le Mans.

Can-Am MkII: Overview
It’s 40 years since Can-Am was reborn for the 1977 North American racingseason. While Can-Am MkII lacked the impact and grandeur of the originalno-holds-barred series, it does hold more significance for Australians.

Punter Pics
Fresh imagery of the 1977 Hardie-Ferodo 1000, especially the 1-2Moffat Ford Dealers ‘form finish’, is hard to come by for mags like AMC.So it was like a breath of fresh air when we first clapped eyes on KeithTrotter’s pics. This is Bathurst 1977 from the spectator’s perspective.

Sacred Sites
For the last two decades Adelaide International Raceway has beensomething of a Clayton’s circuit – the racetrack you have when youdon’t have a racetrack. It’s still sitting out there in the sun, too.

Mini Muscle
Welcome to the first, expanded version of Mini Muscle. For starters, thistime we get to ride along with the cover story and look at scale-modelversions of the legendary A9X Torana.

Missing in Action
MIA is back but for one issue only, as the V8 Sleuth’s detective workhas uncovered a surviving A9X Torana with an amazing history andseveral claims to fame. Its life story includes being the very first GMP&Aracing chassis built and the last A9X to win an ATCC race.