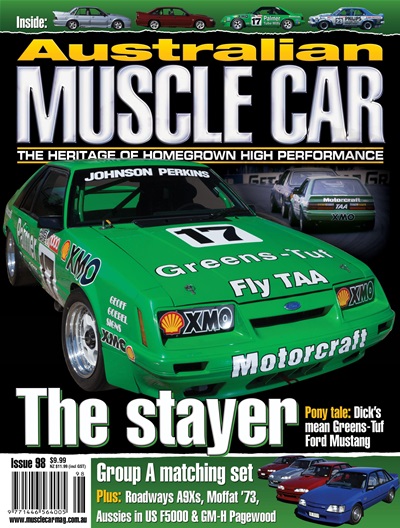 News feature
Soon the only trace of Holden at Pagewood will be the workers’ old pub, asremaining buildings at GM-H’s former Sydney assembly plant are completelytorn down. It’s a metaphor for local manufacturing’s October 20 demise,signifying more than just the end of the line at Elizabeth and for Aussie-builtCommodores. We mark the passing of Aussie Holdens in a left-field way.

Muscle Sport
Our cameras were out in force at Bathurst, Baskerville and Toranafest. Allthe latest on the historic and retro racing scene.

Muscle Maniac
In an unassuming house, in an unassuming street in Brisbane is one of thebest collections of Ford Australia memorabilia in the country… a collectionthat Ford management are not only well aware of, but have also activelyassisted in its development, through various contributions over the years.

Muscle Mail
Readers drop us a line with their memories of the significant Torana A9Xsand pay tribute to living legends of our sport: Allan Moffat and Ray Kaleda.

Dick’s Mustangs
The stayer! Despite the Ford Mustang’s iconic status, in the mid-1980s itwas an unlikely choice for an Aussie touring car legend to tackle the bravenew world of Group A. Despite winning only a single race, this motor racingorphan proved a vital stepping-stone on Dick Johnson’s remarkable journey.

Roadways A9Xs
They were running mates in the late 1970s, spent nearly two decades apartand now they’ve again found a home with each other, as AMC discovers.

The Ton
This magazine is set to hit the ton! As we head towards our landmark 100thissue, to be published in February 2018, we’re digging out some key ‘Kodak’moments from the archives of the mag’s early days. This time we go all theway back to issue #2 and that issue’s cover story shoot.

Muscle Man
We can’t recall ever seeing a profile on perennial touring car privateer BillO’Brien. AMC caught up with O’Brien in Canberra, of course, to hear thestory of his everlasting Bathurst attacks in powder blue.

A Group of Group As
Four brothers. Four Commodores. One common build number. A Group ofGroup As!

Slots
When we asked Brett Jurmann to take over the reins of Slot MachineAddiction, we were inquisitive about the track he had at home. Surely Bretthad an interesting permanent set-up? Turns out, he does: an interpretation ofthe Mt Panorama circuit.

Moffat book extract
Motor racing legend Allan Moffat takes us back to his epic 1973 season –when he won both the ATCC and the (first) Bathurst 1000 – in this extractfrom his long-awaited autobiography, Climbing the Mountain.

Colin Russell
Among this former Lot 6 mechanic’s many achievements in motorsport wasbuilding the engine that won the first Bathurst classic held over 1000km. Wesat down with Russell to hear his recollections of fettling the fastest GTs ofthe late 1960s/early ’70s in both quarter mile and touring car competition.

US F5000: Intro
America’s F5000 scene offered big-buck tobacco-funded prizemoney. Itattracted Australia’s best open-wheeler drivers of the 1970s who invariablypunched above their weight. This is the backgrounder.

US F5000: Matich
It’s fitting that Matich was the first Australian to try his hand in US Formula5000. After all, Matich’s F5000 programme began off the back of his USCan-Am sports car effort.

US F5000: Bartlett et al
Kevin Bartlett had several reasons for hitting the US scene. He and his mateMax Stewart were among the Aussie contingent in American F5000 in 1973.They followed expatriate Australian Horst Kwech, who was among the LolaT300 runners in 1972.

US F5000: The others
Bob Muir is best known for his Army Reserve Falcon, but it was his openwheelercareer during the early ‘70s where he really starred. We also looksat the assaults of John Walker, Warwick Brown, Vern and AJ.