Holden Special Vehicles built some of the world’s finest sports sedans, but with Holden gone General Motors has turned to its traditional luxury brand to build an amazing track-ready four-door.

Over the course of more than two decades HSV evolved to become one of the most famous names in sports sedans. From its early days with the ‘Walkinshaw’ to the final GTS-R W1, the Clayton-based company produced some genuinely world-class four-door muscle cars.

While General Motors decided to close Holden down, effectively destroying HSV’s successful business plan in the process, it seems they were paying attention in Detroit to what HSV was doing down under. Because one look at the 2022 Cadillac CT5-V Blackwing and any HSV aficionado would see a clear connection with this new American sports sedan and what the Australian company produced for decades.

If you want to understand just how serious Cadillac is about this car you only need to look at the name. The CT5 is the brand’s standard luxury sedan, but the addition of the V means it has undergone a significant performance makeover. The standard CT5-V features a 3.0-litre twin-turbo V6 engine that’s good for 270kW of power and 550Nm of torque, which is plenty of grunt to make for a swift sports sedan. But Cadillac didn’t stop there and put the CT5-V through its ‘Blackwing’ program, which is reserved for only its most potent, track-capable machines. 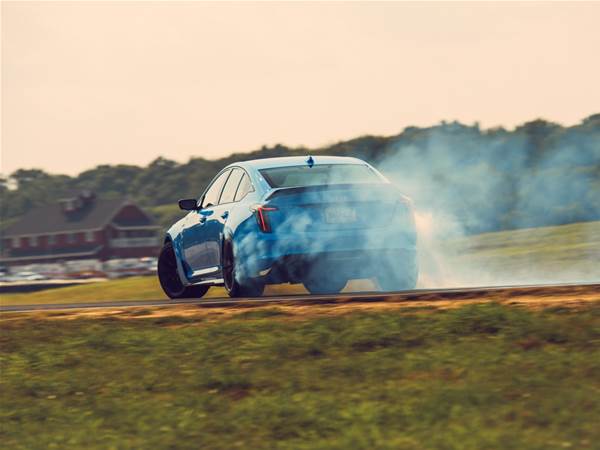 The CT5-V Blackwing is the most powerful production model Cadillac has ever produced.

So to achieve that Cadillac made some major changes, starting under the bonnet. The V6 is ditched for the classic American muscle car engine - a supercharged 6.2-litre V8 (the GM LT4, for those interested). It has been tuned for maximum performance and it doesn’t disappoint, pumping out a whopping 498kW and 893Nm.

In another nod to its American-ness this sophisticated, state-of-the-art, luxury sports sedan is available with a six-speed manual transmission. It’s a great option for driving purists and it’s hardly an old-fashioned ‘box, because it’s equipped with both a racing-style shift-cut on upshifts (or ‘No Lift Shift’ as Caddy calls) and an auto-blip on downshifts; just what you need for perfect shifts every time.

Of course, if you prefer a two-pedal option, Cadillac does offer it with a 10-speed automatic transmission as well.

Naturally all this performance needs taming, so for the Blackwing Cadillac has rolled out all the stops and overhauled the chassis with some significant upgrades.

For starters there’s an electronic limited-slip differential to help get all that grunt to the rear wheels. There’s also magnetic ride control (something HSV fans will be familiar with) that provides adjustable damping for optimum balance between road and track handling. 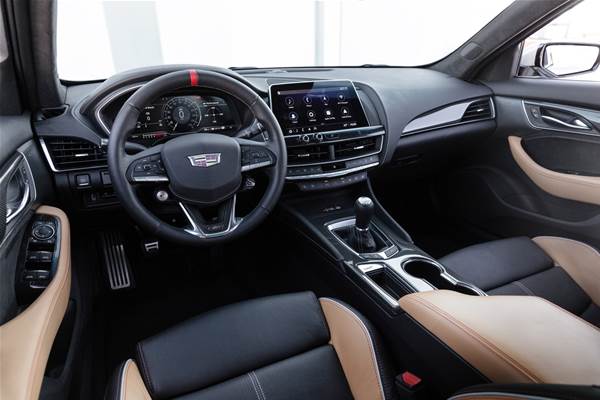 Inside the CT5-V Blackwing is still a luxurious Cadillac.

Then there’s the brakes, with the standard set-up a Brembo package that includes six-piston calipers grabbing 398mm rotors up front and four-piston calipers and 373mm rotors at the rear. However, if that’s not good enough you can get optional carbon ceramic set-up, which GM claims is the largest brake package it has ever offered.

Finally, the Blackwing rolls on excellent Michelin Pilot Sport 4S tyres that measure 275/35 at the front and 305/30 at the rear and are fitted to 19-inch alloy rims.

All this adds up to a seriously potent machine Cadillac claims the CT5-V Blackwing can run 0-60mph in just 3.6 seconds and it covers the quarter-mile in 11.5 seconds at 205km/h.

Sadly though, there are currently no plans to offer the Cadillac CT5-V Blackwing in Australia, even though it would make a fitting addition to the General Motors Specialty Vehicles line-up, sitting alongside the Chevrolet Corvette.

Even more unfortunate, is that the V8-powered Caddy is set to follow the example of the HSV GTS and co. into extinction, with the brand confirming its next generation of track-ready muscle cars will be electric powered.

HDT or HSV: What’s worth more?