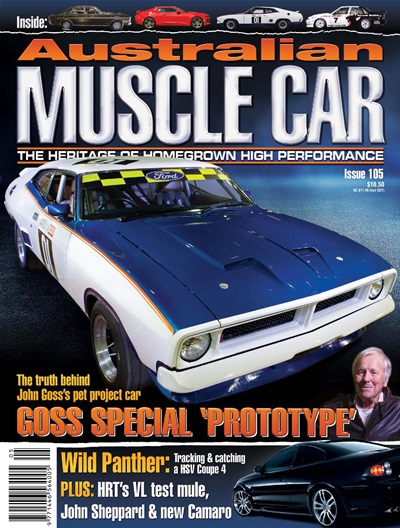 Vale Bob Jane
Bob Jane was a towering  gure in the history of Australian motorsport.

Goss Prototype
The car John Goss wanted to race at Bathurst in 1975 becomes a reality 40-plus years later.

Coupe 4
When the LS1-powered Holden in your garage is an all-wheel-drive ‘all-paws’ Black Panther.

Muscle Man: John Sheppard
He mastermind the success of the Geoghegans, of Bob Jane’s team, and Brock’s A9X Bathurst wins.

My Muscle Car
AMC readers show us their muscle cars.

Race across the World
Extract from John Smailes’ new book about the 1968 London-to-Sydney Marathon.

Back in the day
Mount Panorama was a very different kind of place half a century ago.

Sacred Sites
The Supercars street circuits that didn’t stand the test of time.