Joe Kenwright, the man with more contacts than an optometrist, brings us up-to-date with the new car releases. This edition Joe outlines what the new SUVs from Ford and Holden reveal about the future for Falcon and Commodore. Plus the latest from our ‘Muscle Maniac’ James Cockington.

Has anyone done more laps around Mt Panorama than John Bowe? Jimmy Richards possibly. Bowe is one of a select group to have won both the Bathurst 1000 and the 12 Hour. This edition he comments on the importance of the once around the clock event, manufacturer disinterest in racing and the changes the race has undergone.

Paul Stubber is a racing showman in the Norm Beechey mould. The West Australian continues to tell the story of his early historic touring car racing career. This issue, he recalls the first of many madcap long hauls to an East Coast race meeting. Stubber is Bathurst bound.

This issue readers: say sayonara to AMC’s former skipper; both clap and slap V8 Supercar for its COTF; pitch the Torana Hatch Hutch; finally get a Schnitzer BMW to the chequered flag at Bathurst; and pay tribute to the Charger in its 40th birthday year. And more on the buses. I got you this time, Butler…

Everyone loved the diverse Group C touring car scene of the early 1980s – Brock’s Commodores, Johnson’s Falcons, Moffat’s RX7s, KB’s Camaro, the BMWs, the Nissan Bluebirds and even Gossy’s Jag. Despite its popularity with fans, CAMS killed off Group C for 1985. AMC returns to that golden era and asks the leading players why it all ended.

Hankering for a return to the production-based Bathurst enduros of old? Did you delight when the Bathurst 12 Hour for production cars was resurrected? Well, it’s all changed again. AMC was there to check out the new-look rock around the clock and the muscle cars in the supports too.

Every edition. Every major story. Every muscle car featured in depth. Everybody happy. You bet your life we are.

Tony Edmondson and the Don Elliott-owned Alfetta V8 Sports Sedans were crowd favourites for six seasons. AMC caught up with the long-overlooked Tasmanian to recall his fine achievements. The story of his crash and subsequent recovery was long overdue to be told. That’s why we are telling it now.

The tyranny of distance means West Australians do things differently. That’s why they put their very own slant on some classic muscle cars and gave them skinny radials to race on. Including some gun Bathurst machines. We kid you not. James Cockington has dug up some gems.

North Queenslanders Graham Coutts and Col Neaton joined forces in the mid-1960s to push the Mopar message on the quarter mile and at circuits. AMC’s drag racing guru David Cook looks back at the ultra-successful partnership.

AMC’s Bruce Moxon previews the year ahead in collectables from a variety of companies. The competition between model makers remains fierce, resulting in scale replicas of famous road and racecars that offer extraordinary choice and value.

Check out some of the latest and greatest ‘stuff’ available for muscle car enthusiasts of all ages. This is the page where you learn just who are the leading suppliers to the muscle car culture.

RIP. Rest in pieces. The section that breaks our heart every time, but you guys love. Look carefully, as Out of Action might just have spawned its very own offshoot – Mini Out of Action.

Ever wondered, ‘whatever happened to such-and-such car?’ Missing In Action has tracked down – and buried – many famous and not-so-famous old racecars for nine years. Now it’s time for readers to nominate cars to sniff out. 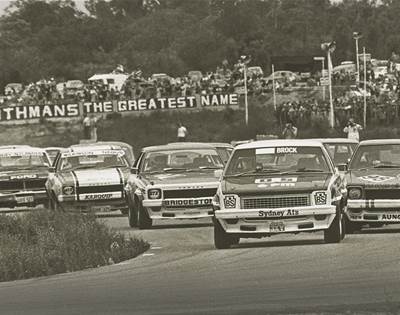