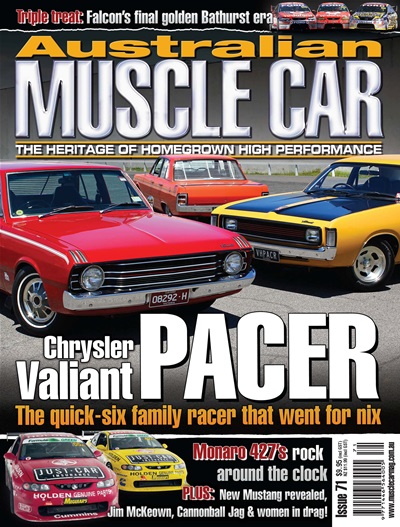 Muscle News
Here ‘tis, the new generation Ford Mustang. Paul Gover reports on the latest from Broadmeadows and Port Melbourne. Suggested song to ‘play in your head’ while reading this section: ‘Wild, Wild Mustang’ by Dick Dale and the Del-Tones. 1960s surf music at its best.

Valiant Pacer: Family Racer
Chrysler Australia managed to squeeze no less than three models – VF, VG and VH – and countless options into its Pacer era. The street-legal factory road racer was the Aussie quick six that could be bought for next to nix. Theme song: Yul Brynner’s ‘Russian Gypsy Song (The Pacer).

Monaro 427C
Ten years have passed since the 2003 Bathurst 24 Hour brought down the curtain on the Mountain marathon and the car which conquered it, the Monaro 427C. To mark the end of GRM’s time with Holden, AMC examines the team’s most successful cars. Theme song: Bill Haley’s ‘Rock Around The Clock’. Gotta play it twice, though.

Triple Eight’s Falcons
The Falcon model’s final golden era at Bathurst came courtesy of Triple Eight’s ‘threepeat’ of the late noughties. As many winning Falcons from the GT era have gone MIA, we’re keeping a very close eye on the three victorious 2006, 2007 and 2008 chassis. In the immortal words of Molly Meldrum, do yourself a favour and DON’T listen to defunct British boyband Triple 8. Roland Dane can’t sing.

Punter Pics
This edition we hand the entire Punter Pics section over to reader David Whitehead, whose efforts in chucking a sickie in 1979 were rewarded by a brush with Peter Brock. Theme song: Lucky Starr’s ‘I’ve Been Everywhere Man’.

Muscle Man
Jim McKeown’s racing career kicked off in bizarre circumstances, then kicked on through a golden age of the ATCC and Bathurst. Can’t think of a relevant theme song so fast forward to next track.

Women in Drag Racing
Many women have had the right stuff to stand toe-to-toe with the best of the guys on the quarter mile. Theme song: Beach Boys’ ‘Little Old Lady From Pasadena’.

Out of Action
Readers again send us pics that make us tear-up... but wait, there’s hope this issue via a special ‘On Vacation’ spread of pics. Theme song: Dragon’s ‘April Sun In Cuba’.

MIA
We are still looking for one of the 3-series Sports Sedans raced by the iconic JPS Team BMW in the 1980s. In the meantime, we go on the hunt for the cars from the very first Bathurst classic, the 1963 Armstrong 500. Theme song: The Velvelette’s ‘Needle In A Haystack’.